A Night with Seth MacFarlane.

So remember last year when I went to Paley Fest for Fringe and met Joshua Jackson and it was all sorts of awesome? Well Paley Fest is going on again now and on Tuesday night Matt and I went to the night honoring Seth MacFarlane, the creator of Family Guy (and American Dad and the Cleveland Show). Basically I am the best fiance ever for forgoing tickets to see the Glee cast for the Seth tickets instead because I knew it’d be something Matt would enjoy.

And luckily I enjoyed it too. By the end of the night my cheeks were sore from laughing and smiling so much.

The show started with a Family Guy/American Dad/Cleveland Show montage which was all sorts of entertaining (especially since I don’t watch any of the shows that often). From there the panel, which included Seth Green, Alex Borstein and several other writers and producers on various Seth shows and Seth MacFarlane of course, came out and the night, moderated by Bill Maher, began! 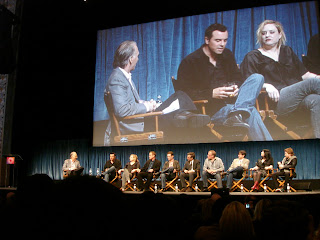 the whole panel, quite the hilarious group.

Everyone shared stories about how they met Seth, embarrassing Seth stories and a whooooole bunch of dirty jokes. 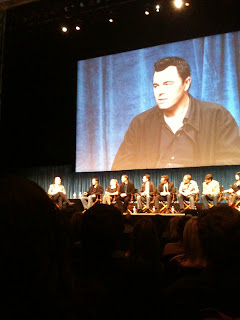 some one-on-one with Seth. 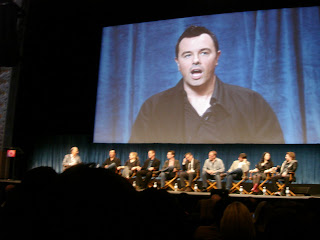 and a little more. 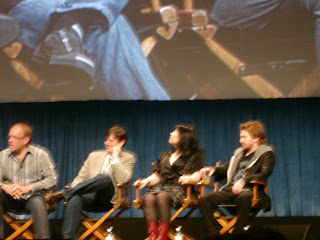 my attempt at a close up of Alex and Seth Green.

Some of the best things that were shared were:

All in all everyone was so candid and switching between character voices and sharing funny anecdotes that it made the evening quite entertaining all around. Although I’m not a converted Family Guy super fan or anything it is quite a funny show and now just a little bit funnier since I know some of what goes into it.

Are you a Seth fan? Oh and if you’re a TV fan in general, check out the Paley Center, you won’t regret it.