Annnd I’m back. Weird, I know, I didn’t post for two days and it was just yeah well weird. So how did the last couple of days go? And go!

Thursday: Headed to Houston early in the AM and made it to the Four Seasons for the Mom 2.0 Summit. And um can I just say how much I love staying at the Four Seasons? I was just plain out spoiled! After checking in for the Summit and running into Jess I actually worked out for a bit before ordering room service and relaxing in my bath robe before heading to the Mad Men party with Jess, Allison and Brittney. Basically it was a great first night in Texas. 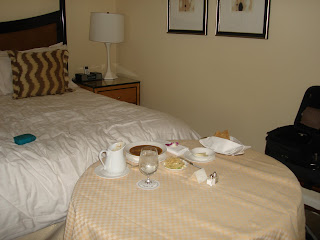 room service and the best bed ever.
yeah I was definitely spoiled and it was awesome. 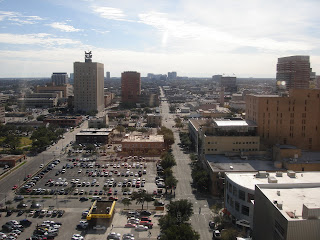 Friday: A full of conference and attending the expo and more conference and all around a really productive an awesome day. One of the most fun events was heading to the Mom 2.0 Defining a Movement Photo Display. The pictures were amazing (you can check out a video of some of them here), the conversation was great, the tacos were delicious and it was just a great time. Afterwards, me, Allison, Brittney and Heidi headed over to a delicious tapas bar near the hotel and ummm I think I might become a tapas addict, it was so fun and perfect and delicious!! After dinner we headed back to the hotel bar where we had a rousing conversation with Jessica ranging anywhere from Dawson’s Creek to blogging to Twilight to all sorts of awesomeness, it was great and man I heart those ladies.

Saturday: Last day of the conference but sadly I was only able to attend one morning panel and lunch before I had to head on out. 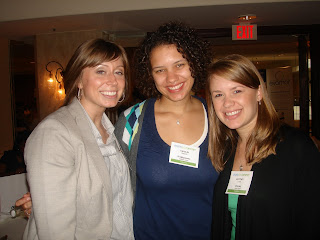 Allison, me and Brittney right before I left.

My flight home wasn’t too exciting however when we landed and were getting off the plane I realized that Ellen Page was sitting right in front of me. I was half expecting someone to make a Juno comment, well that someone would have been me but instead I just wanted to tell her that I was a fan, but alas I did not. Eventually made it home and Matt and I headed to Yard House for dinner so I could carb up on mac and cheese (um, yumm!) and then headed to bed early so I could rest up for the half marathon Sunday, woo!

Sunday: Woke up bright and early for the Pasadena Half Marathon! Thank you again for everyone who tweeted, texted and emailed me it meant a lot to have so many people rooting for me. 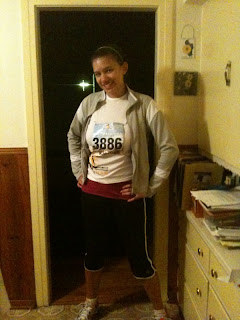 Basically we (me, my mom, and my two aunts) were so excited to walk the half marathon and the fact that it didn’t rain on us (although apparently we weren’t too far ahead of a lot of downpour) didn’t hurt either. Ultimately we finished in three hours and forty two minutes which was five minutes faster than our walking time last year which was awesome! 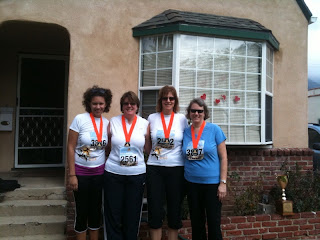 The rest of my day was spent napping on the couch and watching TV before heading up to my aunts for a celebratory dinner of lasagna and margaritas. We also decided to watch A Serious Man which was not a great decision. We had no idea what was going on, it was a weird movie and eh all around, at least we were drinking so that made it somewhat entertaining. Nonetheless we made it, we walked a half marathon and it’s a great feeling!

Monday: I woke up feeling a little sore and a lot tired so I took the day off. My mom and aunts and I actually all took the day off and decided to see Shutter Island. Yes I know I vowed to not see that movie due to the fact that it looked so damn scary, but alas it wasn’t as scary as it seemed and was definitely pretty interesting and I heart Leo. The rest of the day was spent cleaning up and treating the fam to some happy hour deals and margaritas at El Torito for dinner. Afterwards Matt and I came home to catch up on the DVR and for me to get back to the internet, because man I missed it. Basically, a lovely way to wrap up an even more lovely weekend.

And that’s my long weekend kids, crazy pants right? And how was your weekend? Anything I missed out on the past five days?