Overly hot with a big chance of weekend.

A freeish weekend? I almost didn’t know what to do with myself…almost. But there was plenty going on.

Friday: After work I headed home and Matt and I had a relaxing night to ourselves. It was awesome. I thought it would be a Wii and wine kind of night but instead it was Wolverine and wine, which was just fine by me. Basically it was relaxing and just us and just what we needed.

Saturday: Slept in a bit (sweetness) before heading over to a preview day at The Counter with Matt’s family. If you haven’t been to The Counter I highly recommend it, you get to basically create your own burgers and they’re massive and delicious. Exhibit A: 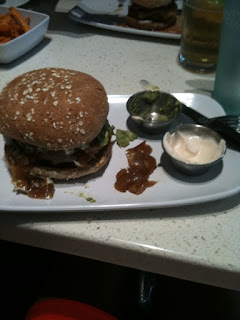 Yeah I got a honey wheat bun, turkey burger, with grilled onions, homemade guacamole, sun dried tomatoes, provolone cheese and spicy sour cream sauce. Basically it was amazing! And so were their fries, mmmm.

After lunch I went on a shopping spree. Oy. Well good oy and bad oy. Good because um it was shopping and I love shopping, bad oy because it was a billion degrees out (okay not a billion but definitely in the 90s) and man I spent too much money this weekend, haha.

Post shopping I came home was actually really productive and just hung out for a bit with Matt before heading to grab some drinks with a couple of friends. So yeah I went to one of my favorite places, Yard House and just got to be girly (which was awesome) and catch up with my friends since I’ve been so busy and hadn’t seen them in a while. My sister and her friends also showed up later (where I was made fun of for wearing my ‘Born to Blog’ shirt, seriously some non-bloggers just don’t get it) so we hung out with them but eventually we all got tired (man we’re old sometimes) and headed home. Oh what a good night it was.

Sunday: Caught up on some TV in the morning then headed over to pick up my little brother for our day together. As a birthday gift to him back in July I said I’d take him out to the movies and let him pick so that’s what we did. However we did do a little shopping beforehand (hey I needed a dress for the wedding this weekend!) and thank you for all who helped via twitter, haha. But then I made up for the shopping with lunch at Island’s. 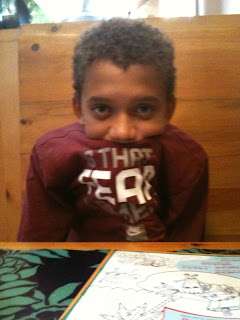 Afterwards we saw Cloudy with a Chance of Meatballs, which was actually really cute and pretty funny, I liked it and so did Kurt. Basically it was a loverly afternoon of siblingness.

After walking I did a nice six mile walk with my mom, aunts, brother and uncle then came home to eat and relax with Matt and pretend that Monday wasn’t coming, haha.