Oh so remember when I said I had no plans this weekend? Yeah well I was sort of right. It was still sort of a doozy.

Friday: After a loooong day at work (only eight people in the office can make it drag on) I headed on over to Matt’s mom’s house in La Canada. Yes the same La Canada that is being encompassed by flames and massive smoke and wo. It was sort of crazy. We had some dinner, drank lots of wine, watched Yes Man (which I sort of really liked), caught some fire updates on the news and eventually some friends made their way over. Eventually we all took off and made our way to a veiwpoint where we could see all of the fires and everything, it was breathtaking. I only got one decent picture but man I can’t even begin to describe all the flames and the view of the city and the pops we heard when power lines caught fire. 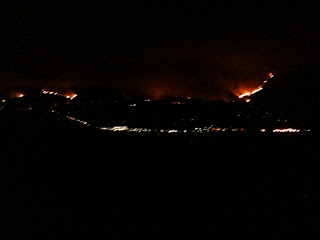 Basically it was a crazy night of inhaling fumes and watching the mountain burn. It was a little nuts.

Saturday: Slept in a bit (hark! I love sleeping in), then before we knew it we were off to check out some potential wedding venues. It was sort of exciting. I even think we found a place we both liked so that’s sort of awesome. Afterwards we did some errand running, tried not to melt and relaxing for a bit before heading back over to Matt’s mom’s house. Oh yeah and this was what I saw going over there: 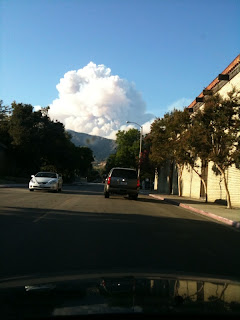 it looked like a bomb went off, so crazy.

Seriously, so crazy. We had dinner, watched after the house (it’s not in immediate danger but we were there just in case). Afterwards we came home and played some Wii! Seriously we’re Wii addicts, it’s sort of awesome. So yeah we played some, had some wine, watched some TV and enjoyed the evening. Twas loverly.

Sunday: Slept in again (Hark to the second!) then did some errand running for my cousin’s bridal shower with my mom, that I’m hosting next weekend, yes NEXT weekend, ah! (ohmygoshwhatdidIgetmyselfintoandwhydidIwaitsolatetoplanit?!). After shopping and gaping at the smoke still I came home to relax a bit, do some cleaning and some organizing and yeah, awesomeness. The only other thing I really did was go to my aunt and uncle’s house for my uncle’s birthday and then talk about the bridal shower (thank goodness for crafty aunts!). Then Matt and I spent the rest of the night hanging out and mentally prepping me for my week free of cheese, haha.

And how was your weekend? I hope if you’re in SoCal you’re free of fires and staying safe!