Cheeseburgers make the weekend go round.

Why hello there freaders. I apologize now if this post is rambling and incoherent because I am currently hopped up on Dayquil, Advil and slept pretty much all day long yesterday. Anyhoo moving on….

Thursday: Woke up early and hopped a flight to Houston. Woo! I was lucky enough to have a middle seat in between a very large man and a very tall guy. Yeah it was awesome (ummmmno). The only good thing that came out of that was that I got to finish reading Confessions of a Shopaholic (which was pretty cute). Once I got to Houston I relaxed in my hotel a bit before heading to a mixer for the Mom 2.0 Summit. I was slightly nervous that I wouldn’t know anyone, granted I was there for work, but everyone was so sociable and nice, it was great.

Friday: All day conferencing and hanging out and it was not only informative but good times too. One of the best surprises was that Allison from Confessions of a Cohabitant ended up being there for work also so we got to hang out all weekend which was a nice surprise. After the conference ended for the day there was a big Mardi Gras carnivale party which was a pretty good time. 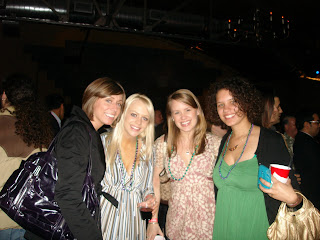 Me, Allison and Brittney rockin the bag hat look 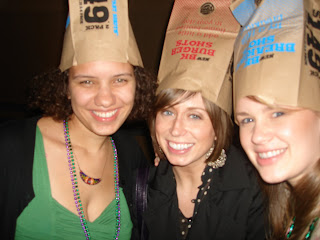 Who doesn’t love a good cheeseburger? 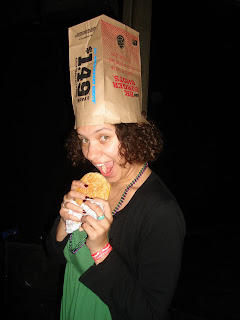 I had to get a picture with one of the party planners,
Yvonne from Joy Unexpected, heart her and her blog 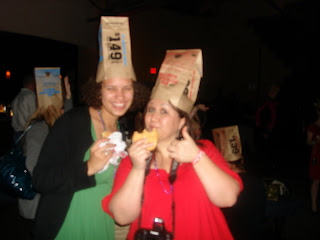 oh so many cheeseburgers! 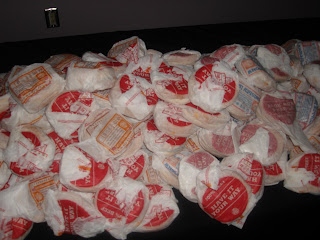 Seriously it was so much fun! Afterwards me and Brittney headed back to Allison’s mini apartment, haha. I swear, we felt like celebs! All in all it was a great night.

Saturday: Finished up the conference and flew back to LA with much better sleeping success. However I did start to feel sick which wasn’t too hot. Matt and my sister picked me up from the airport and we went straight to Matt’s brother’s birthday party at his new apartment. I drank wine to try and help the sickness from coming on and it worked for a bit, haha. All in all the party was a good time, the new apartment was great and the people were awesome. Woo.

Sunday: Yeah I woke up feeling like absolute crap. Feverish, achey, sore throat, yeah all of the above. I spent the majority of my day in bed and drinking water, it was awful. Luckily I finally rallied enough to watch the Academy Awards (oh yes that recap is coming tomorrow) granted I still felt like crap, uck. Eventually I just called it a night and hoped I would be good enough to make it to work today, so eh. Apparently I’m just not cut out for busy traveling weekends all the time, haha.

And how was your weekend? Watch the Oscar’s? Avoid sickness I hope?