Well hello there!
As you dedicated readers know Katelin is off in Houston doing fun things and because I am THE fantastic little sister, I’m taking over her blog for the day :)
I know, that nearly made you explode with excitement, just try to keep it together until the end.

So, for those of you familiar with the Facebook world, there has been a “25 things” note going around. Once you’re tagged, its near unavoidable and alas, you post 25 random things about yourself for all to read. That being said, I’ve decided to post 15 (becuase 25 is a TON) random things that relate to my sister somehow. It is a definite possibility that I will make your day 15 different times by the end, so get ready.

1. When we were little, we had a variety of pets. When it comes to the turtles we tell two completely different stories. She says we had 2 whereas i am convinced we had 4 that were named after the ninja turtles… To this day I think she’s wrong, but I mean… she remembers random things wayyyyyy better than i do.

2. Katelin is the ONLY person I know that doesn’t like strawberries.

3. We both have a mild obsession with long tanktops from Old Navy. I’m pretty sure she’s stolen some of mine. You suck for that, but I love you cause now I’ll buy more :)

4. In our old house, two neighbors of ours across the street had birthdays that were on the 25th day of the month, so we called ourselves “The 25th friends.” (January, February, April and November… holler.)

5. I love that she incorporates the word “hark” into conversation almost every time we talk.

6. One day I will get her to get a tattoo with me (I have 4 already and aim for 7 by the time I’m done). I might have to bribe her into it with some lavish gift, but knowing she cant even get her ears pierced, this might be a phenomenal experience.

7. I once thought of asking her to write one of my lit papers for me since I know she’s way better at it, but then i thought her response would go something like this: “Hahaha… No.” Mean? maybe… typical of an older sister? Definitely.

8. <– My favorite number :) And my favorite random thing… We were driving home from some event at night, and like 200 yards from our house there was a cat in the middle of the street. It sort of did this dance thing where it was so confused and didn't know which way to go, and like 12 seconds later it finally bolted left. For some reason we thought this was HIlarious and we still laugh about it whenever it comes up. In fact, I'm laughing right now and I'm sure she will when she reads it. Yes, we're that cool :)

9. Packing for her to come home from Denison after graduation was riiiiiidiculous! I’ve never seen so much stuff fit into 12 suitcases. My flight was delayed 14 hours for some random reason, so good thing I had her pillow.

10. I came home last weekend and made shrimp risotto for the family. I gave her leftovers. She loved it. She told me so. She also just loves leftovers in general.

11. Her 13th birthday party was quite interesting… I won’t tell the story now because she might come after me, but it’s worth guilting her into telling you.

12. She took me to an O.A.R. concert a while ago and it was amazing. Now, I know all the words and can sing along to every song with her :)

13. When I was a freshman in high school and she was a senior, there was a day when seniors were supposed to pie their freshman siblings. I, being the natural butthead that I am refused and I think she’ll hold that over me forever. So in return, I’ve agreed to get a pedicure with her (I haaaaaate hate hate everything about feet and mine are way ticklish so trust me when I say thats huge…).

14. She looks amazing in blue… and green… and red… and black… and like, everything. curse you older sister! But not :)

15. She and “Le Boy”/Mateo/Bananana/Matt are perfect.

Tadaaaaaaa. 30 minutes later, 15 wonderful things, i fantastic sister. Love love love it all. Hope you all enjoyed that :) You stay classy bloggers… and thanks for stopping by… but mainly, stay classy <3 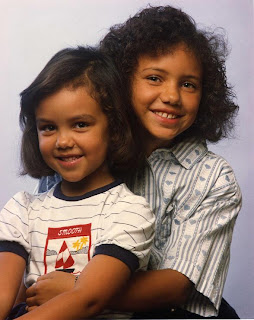