"My friends say I’m crazy and I agree…"

Name that tune! Anyone? Anyone? I’ll give you a hint, it’s from my most favoritest band, O.A.R. Ah! Anyhoo let’s get to the weekend shall we? Stupid Charter has left me internetless at home so alas the last minute weekend post it is. And go!

Friday: Friday oh Friday. Anyone that was following my tweets saw that my boss came through and got me free tickets to see O.A.R. and I was basically listening to them all day prepping for the big show. After work I headed home, grabbed Matt and we were off to Club Nokia down in the new L.A. Live area which was pretty sweet. Well we go to the pick up office and I tell them my name and then the lady hands back two tickets and two stickers. So we go to another guy who puts our wrist bands on with the big letters of VIP on them (holla)! And I asked what the sticker was for and no one knew. Eventually we get inside (so nice in there) and ask a security guard what the sticker is for and they’re like “oh it’s too go backstage after the show.” I’m pretty sure my jaw hit the ground. Anyhoo after all of that Matt and I went up to the VIP area grabbed some dinner (sweet lord Kobe beef burgers are fantastic) and drinks and watched some of the opener who I also love, Eric Hutchinson, check. him. out.

Eric rockin out on stage 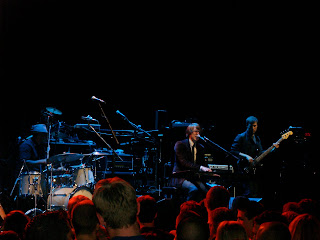 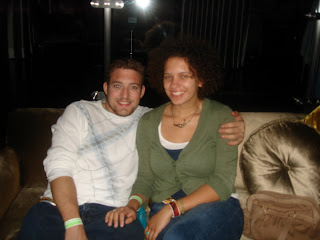 Eventually the show started and O.A.R. was awesome. Seriously I don’t think they can put on a bad show. I even realized that I have now seen them six times in four different states, yeah I’d call myself a fan, haha. They even did this great rendition of “Hey Girl” which is my all time fave of theirs and I was pretty much in heaven. Eric Hutchinson even came out and sang with O.A.R. and it was sooooo cool. All in all I danced and sang my little heart out and it was amazing. 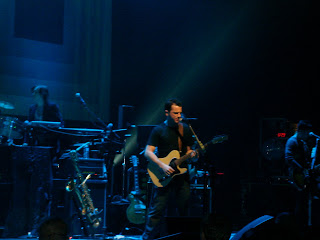 After the show was over Matt and I bolted to the back stage door where we were promptly rerouted to go upstairs to the VIP area and wait there. Well we got there, hanged out a bit, saw tons of random people that all seemed to know each other and waited for the band to make their way there. We waited….and waited….and eventually they all trickled in. I tried so hard to talk to Benji the bass player but he just wasn’t interested, which was sort of lame. I got pretty disheartened and told Matt we could go and right as we are leaving, who walks in? Oh, oh just Marc, the lead singer. So after he chats with some other fans I tapped his shoulder and said hi and that we were big fans and if I could get a picture with him. He was so so nice and was like “of course” and his wife even offered to take the pic so Matt could get in it too. Basically Marc was super nice and really appreciative of the fans which I loved and made the night a whole lot better… 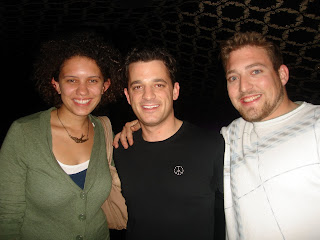 All in all it was an amazing night and good gracious I love O.A.R. :)

Saturday: After the awesomeness that was Friday night I spent Saturday working out on the Wii Fit and playing Cinderella. I cleaned pretty much all afternoon while Matt was at work and I’m pretty sure I got high on Scruby Bleach, haha. But hey the place does sparkle. After cleaning away all day I watched Catch Me If You Can, which I love. It was on TV and I was watching it then I realized I owned it so I might as well just watch the DVD, which I did. And oh Leo I love you. And did you know Amy Adams, Ellen Pompeo, Jen Garner and Elizabeth Banks are all in it?? I totally forgot!

Anyhoo once Matt got home we headed to dinner at Cheesecake Factory which was so good. My food was okay, but the white truffle raspberry cheesecake was freaking amazing, I highly recommend it. After dinner we just headed home to a night in with wine and catching up on the DVR, twas loverly.

Sunday: Slept in a bit, headed to a matinee showing of Doubt with my mom then off to the Rose Bowl for our six mile walk. Oh, oh but before I forget…before the movie I went to Starbucks and this guy walks in and I stared a bit because I swore I knew him. Alas I did know actually know him rather I recognized him. At first I thought it was from ER and I was set on that. But when I was walking and talking about him again I realized it wasn’t from ER that I recognize him the most, it was Grey’s Anatomy, it was Bailey’s husband! Haha, so of course I Imdbed him today and his name is Cress Williams and aha! he was on ER too! So I was right! Anyhoo, I was excited to have my first two celeb run ins of ’09 within 2 days of each other, haha. So yeah, after my run in, the movie and walking I went to my parents where Matt met me and we had dinner with the crazy fam. Once dinner was over we all played a game of ImagineIff, seriously the game is ridiculous but highly entertaining.

After dinner Matt and I headed home to relax, called Charter and find out why we have no internet, relaxed and Wiied it up before bed.

Seriously, my kind of weekend.