So have I ever told you about the time I hid in a bath tub with my cousin?

Well today is your lucky day, today is story time here at gorgeous footsteps in the sand…and this is by far one of the most entertaining stories of my childhood.

The story starts with my younger cousin, Brittany and I playing hide-n-seek with my little sister. Being the sneaky older kids that we were we decided that hiding in the bathtub behind the shower curtain would be the hardest place for my sister to find us. And it was. We must have been in the bathtub half an hour at least just giggling at how my sister had yet to find us (turns out she gave up and was playing in our room) and the fact that we were sitting in a bathtub behind the shower curtain fully clothed (we were young and easily amused, what can I say?).

After a couple more minutes of giggling Brittany said to me “Shouldn’t we get out of here now? What if your dad comes in??” Now me being the wiser, older cousin that I was, said “No, it’s fine, my dad’s not even here.” …. What do you think happened next? haha.

Not even a minute later did we hear the bathroom door open and shut, and my dad start to pee. My cousin started laughing uncontrollably and I had to hold my hand over her mouth to stop the squeals. However, by then our position had been compromised and my dad ripped open the shower curtain (don’t worry he zipped up by then) to see two ridiculously giggly girls. As I recall he let out a “What the???” and then went to the other bathroom to pee as Brittany and I laughed uncontrollably in the tub. It was classic. Had we had a video camera we would have won the big time prize on AFV, oh well.

Needless to say we were banned from playing hide-n-seek for a while and the shower curtain was always kept open, haha.

Britt and I, still silly 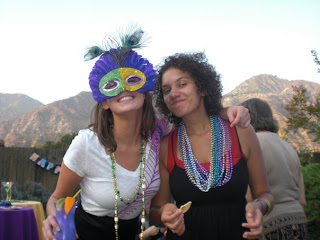