I voted for Edward and Keanu.

Happy voting day everyone! I know I’m not really one to talk about politics here but really if you don’t vote today, you’re lame. I don’t care who or what you vote for, as long as you vote. I waited 40 minutes in line to make my vote count and I’d like to think it did, holla. 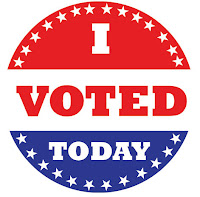 Anyhoodles, moving on from the voting palooza that’s happening everywhere today, I bring the latest and the greatest taking over Hollywood:

And that my friends is what’s happening in the world of Hollywood and Katelin today, holla!