Bringing you the most important news of course…

So apparently I should have written the Lakers a letter. Granted I don’t know if it would have helped since the letter I wrote to the Dodgers went unattended to, pshaw, LA sports teams you drive me crazy.

In other news unrelated to sports, did anyone catch this week’s People cover? 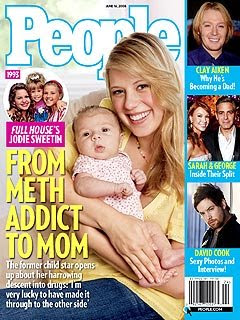 Does anything strike you as odd about this cover? Ummm maybe the caption perhaps? Not that she wasn’t a meth addict or anything but seriously, it’s so in your face. When Nicole Richie had Harlow the cover wasn’t “I used to be skin and bones and drive backwards on freeways, until I became a mom, Harlow saved me!” Yeah, don’t think so. I don’t know it’s just weird to me how People went about her story, but I guess she’s okay with it. So congrats to Jodie.

And in good samaritan celebrity news Jim Carrey and Jenny McCarthy marched in DC for Green our Vaccines with her autistic son, Evan. Seriously, I love them. I love them all. Jim and Jenny together are so cute and her son is precious and I love that they do so much for special needs children and autism and everything in between, they seriously rock. 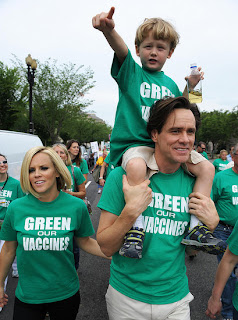 And in movie news we have a preview for He’s Just Not That Into You. Remember when I saw it back in April and loved it? Well apparently it’s not coming out until October now. But still, the preview is out and I highly recommend you all check it out, it’s a good one.

And in WTF news a black watermelon was auctioned off in Japan for a mere $6,100. Yeah take that in. A watermelon. But apparently that’s nothing because last month a pair of “Yubari” cantaloupe melons sold for $23,500. Gah. Those must be some damn good fruit is all I have to say.

In jump for joy news, it’s Friday! Wee! Squee! Woo! Ta da! It’s finally here. Don’t ask me why, but this has been one long ass week and I’m so glad it’s almost over. And the weekend? Ah, the weekend. Full of gorgeous weather and lots of plans, I can hardly contain myself (only 8 hours left, haha).

Hope you all have a most fantabulous weekend!