The time I met Aladdin, the Fonz and a Housewife.

So it’s no secret that I love pretty much all things Hollywood. I especially love celebrities and celeb gossip and all that ridiculous stuff. But even more so, I love meeting celebrities. Don’t ask me why, because I honestly don’t know. However I know that I’ve been pretty lucky in the celebrity department and I wanted to take today’s post to share a couple more celebrity run ins I’ve had in the past, just because, woo:

So the summer before my senior year of college I was lucky enough to score an internship at Extra, it was awesome. I basically met more celebrities that summer than I had in the past three years, I was living on cloud nine. And while I was working at Extra, my best friend was working at Warner Brothers seeing her fair share of celebrities as well, basically we loved it.

Well story number one comes from a day I went to go meet Megan for lunch at Warner. I was so excited to go to the lot because, well… it’s awesome. I love walking on the backlot and all that jazz and I was hoping to see some big celebrity because Megan had just seen George Clooney the day before, so my fingers were crossed. Well we got to lunch in the main cafeteria and I look around and all I see is a bunch of extras all bloodied and kind of gross (which was cool, but they weren’t celebrities). So my hopes were running low that I’d actually see a celeb and I’m talking to Megan when a couple seconds later I hear a voice right behind me that I could pick out of anywhere…it was Aladdin! Okay Aladdin is my all time favorite Disney movie (next to Peter Pan) so I was beyond excited. But even cooler is that the voice of Aladdin is none other than Scott Weinger also known as Steve from Full House! 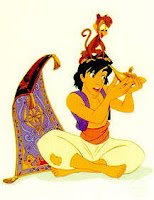 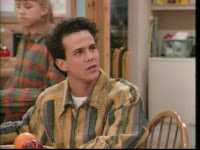 I don’t really think I said anything to him except “excuse me” or “hi”, I’m not quite sure. But he was nice and still cute and still Aladdin, and that’s all that really mattered, haha.

Celebrity story number two actually comes from Extra. Towards the end of my time there I was basically working one on one with a producer and writing questions for interviews. So for the on set interview of Crossing Jordan I was asked to come along (insert squeeeee). I didn’t even watch that show but I was so excited to go. I got to meet Jill Hennessy (of Law and Order fame and the star of the show), Jerry O’ Connell (who was incredibly nice to me), Kathryn Hahn (who was so sweet and awesome) and by far the best person, Henry Winkler, yes the Fonz. I wasn’t

even a Happy Days fan but who doesn’t know the Fonz? While Henry was giving his interview I was scribbling notes down and in the middle of his interview he goes “are you writing a novel there? How does your hand not hurt yet? I’m impressed. ” and basically went on to praise me and say how I’m so dedicated, etc. He was so nice, it was amazing. So yes I am now a Fonz fan for life.

And for the last celebrity story of the day from Extra (trust me I have more, but this post would go on forever if I talked about them all) is one featuring one of my favorite Housewives, Marcia Cross. It was the morning the Emmy nominations had been announced and all the interns got assigned 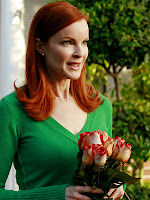 random places to go to take notes on interviews and bring back tapes and I was lucky enough to get assigned to someone I actually knew, haha. So after getting lost beyond words and fearing that I’d lose my job I finally made it to some random ass building and had to use what little muscles I had to lug a cooler full of champagne and a chocolate gift set across a parking lot and into an elevator that was impossible to find. Basically by the time I finally made it to the room where the Extra interviewer and Marcia were I looked a little beat. Luckily Marcia was so nice and told me to take a breath and then they started their interview while I took notes and was in awe of her red hair (seriously it was glowing) on her green sweater (yeah you know she did that on purpose, haha). It was also cool to see that she is nothing like Bree, haha. Not nearly as proper and even admitted that her house was nowhere near the cleanliness that Bree kept hers. All in all she was one of the nicest people I met that summer and the only one still working, haha.

Well that’s all the celebness I got today. Have you met anyone famous lately? Do tell :)