Anniversary, we haz it.

So today is Matt and I’s two year anniversary. Yes you’re reading that right, two years. And yesterday was two years since I graduated college, so how does that figure?

Well let me give some back story since I don’t think I’ve ever mentioned it. I sort of just brought Matt into my blog one day and was like “oh yeah, I have a boyfriend, say hi to Matt, he’s cute.” So here’s the us story in short (sort of):

Flashback to Summer 2000. I spent the whole summer abroad in Germany and came back to lots of new people in my friends circle, which was totally awesome. Well I went with my friend to her boyfriend’s house (who was also my friend) and he had some friends over, including Matt, and it was one big schnazzy hangout (oh Summer). After that I saw Matt a couple times and we instantly hit it off as friends. And before we knew it we were best friends.

Best friends that even though we didn’t go to the same high school talked like we did and hung out with all our mutual friends, it was awesome. He went to some dances at my school with some of my friends and I went to his prom with him Junior and Senior year, it was quite the friendship we had going. Jump to Senior year when I went on Spring Break with him, his family and some friends. Matt told me he liked me. I really didn’t know what to say, except “No you don’t.” Haha. But my relationship issues are for a whole other post. Basically I didn’t want to mess the friendship up especially since I was heading off to Ohio in the Fall and he was going to Arizona and I was not going to college with a boyfriend. So we left it at that.

Fast forward to March of my Senior year in college. Matt and I were still super close and talked a lot and were definitely enjoying our separate lives at college. I had just been home the week before with my friends for Spring Break so you can imagine my surprise when on a random Friday night Matt ended up at my apartment door. He worked in cahoots with my roommate to surprise me, and man was I surprised, haha. It was probably one of the best weekends on campus. Parties all day, hanging out with everyone and Matt it was amazing.

So come Saturday night, his last night there I decided to crash on the futon with him and have a slumber party. I think we were both a little tipsy and Matt started doing the flirty hand thing (girls you know what I’m talking about right?) so I just looked him in the eye and was like “Do you want to kiss me?” which I’m pretty sure through him off but he did look back and say “Yeah.” So me being the bold person that I am basically said “Well then you have ten seconds to do it.” And he listened, haha. And we made out like high schoolers on my futon until we fell asleep.

After that I didn’t really know what to do. I swear I had just seen the episode of Grey’s when Meredith and George start fighting after they have sex and I was like “Ah! I can’t ruin a friendship” but at the same time couldn’t help thinking “but what if it’s meant to be?” Yes I know, I’m retarded. So we (more like me) decided that we’d put whatever “us” there was on hold until I came home after graduation and see how things went from there.

Well as the story goes and the date I came home and realized “yes I do want to be with Matt, yes it is mean to be.” Silly and corny as it is, it’s crazy too. I was practically single my whole life, with random hookups and boyfriend thrown in the mix for a short bit too, and the idea that if I started dating Matt everything would be put on the line sort of freaked me out.

But I’m way past the freaking out and more into the ohemgeeilovethisboy mode, haha.

So with that, Happy Anniversary Matt! I love you :) 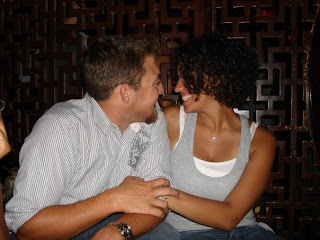 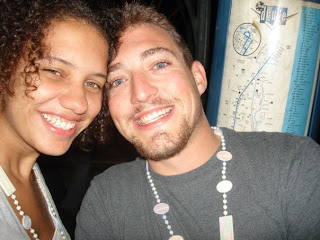 Also note I leave for Tucson tomorrow so tune in to one fabulous guest blogger, have a fabulous weekend all!