Violet and Heidi and Batman, oh my!

So only one more birthdayish post and then I’m done, kaput, finito…that is, until next year :)

But in birthdayness to myself I decided to buy a URL that’s a little easier to say to people than “gorgeousfootstepsinthesand.blogspot.com, got it? Need me to repeat it?” Eh yeah. That was annoying. So I’m still keeping the title and the old URL will work too. But just for linking sake and updating and what have you, I present you with, drum roll please………

I thought it was appropriate and a little bit easier to remember and gosh darnit I like it. And thanks to everyone over at 20SB who responded to my URL question since I really had no idea what I was doing, but Blogger made it a little bit easier.

Anyhoo, moving on to cuter and more Hollywood things….

First and foremost, Violet! She’s back. And man is she still so cute, seriously. Precious. 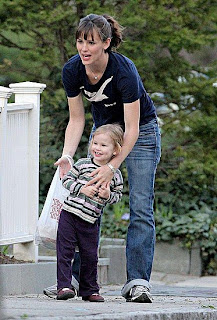 Secondly, The Hills? Anyone? Don’t worry I won’t give any spoilers away today, but really. Gah. The show is driving me crazy. Lauren is turning into a bitch, Lo is turning into her lap dog, Stephen’s entrance was only so-so compared to what I imagined and I still want to throw my remote at Spencer’s freaking face, gah! And to add to that, yesterday I was listening to Ryan Seacrest and Lo and Stephen were in the studio and Spencer called in, yeah that was ridiculous. Spencer basically accused them of being so quiet and nice because Lauren hands them their pay checks….um Spencer, wake up! You’re only “famous” because you’re on the show that Lauren started, pshaw. And then Spencer and Heidi do shit like this in our nation’s capital, I swear it’s tainted now, gah. And lastly in Hills news, the four leading ladies apparently all posed together for Rolling Stone and Perez has it up, so check it out, it’s not that bad actually. But I still don’t know why I watch. Oh wait yes I do. I love to torture myself with ridiculous people, haha. Oy.

And lastly in today’s Hollywood news, The Dark Knight. I can’t wait for this movie to come out. As sad as it’s going to be to see Heath, I feel like he’s going to do an amazing job and this movie is going to rock. Ah. So on that note, several new promo posters have been released (however they are possibly fake) and I think they’re awesome. This one is a combo of three and it’s definitely my fave: 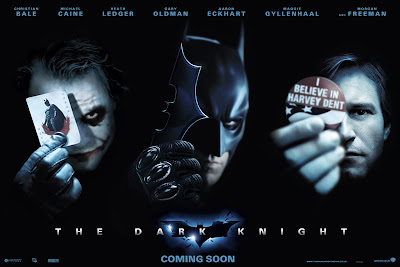 Okay I’m done. Time to get some work done and what have you, but remember change my URL and we’re set, woo. Have a most fabulous day!