Babies and Blondes and Babies, Oh my!

Well nothing too big and exciting in my weekend, I basically laid it all out on Friday, haha. Granted the weather was fabulous and I spent a lot of time outside playing basketball with the brothers and playing my my friend’s kid, it was fabulous. I also saw a couple new movies which I may or may not decide to review in future posts…I have yet to decide. Anyhoo…today’s post is dedicated to Hollywood Headlines. What’s making the news and what I think about it…becuase that’s obviously the most important part, haha, so here goes:

– Luciana Barroso is one lucky beyotch. Mrs. Matt Damon is pregnant with baby #2. But really this just means that Jen needs to get knocked up again so baby Damon can have another play buddy. Isabella has Violet to play with…now the new baby needs a friend too. Hear that Jen and Ben? Get to it! I’ll help babysit :)

– Speaking of babies, apparently Jonathan Jackson has two kids and his wife is expecting a third! Wow. When did that happen!? He’s like a freaking Hanson brother, popping out kids left and right, it’s crazy. Did I mention I met him once? And he was quite nice, Courtney can attest to this. And if you have no idea who I’m talking about, just go watch Camp Nowhere, it’s amazing.

– Okay if this picture doesn’t scream super cute I don’t know what does: 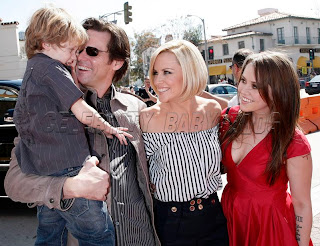 Jim Carrey holding Jenny McCarthy’s son with Jim’s daughter looking on at the premiere of Horton Hears a Who. Precious!

– In other pregnant people news, apparently Lisa Marie Presley is sooooo mad that newspapers were calling her fat when really she’s pregnant, she’s suing. Ummm WTF Lisa?! You are not the only celeb that’s been called fat. So many celebs have been speculated upon when pregnant or having a bad picture angle day. You don’t hear Kate Hudson or Mrs. Adam Sandler suing? So yeah, shut it.

– In skanky ho news, Paris Hilton was spotted this weekend rocking a diamond “BM” ring on her wedding finger. Um. Ew. Granted I used to say ew about Nicole too and look what the other Madden did to her, got her knocked up and now she’s sort of likable. Maybe Paris should just get knocked up too…haha. Wait what am I saying, I still won’t like her. Gah.

– Speaking of dumb blondes, Jessica Simpson is singing to the troops in Kuwait. Now there is something I can appreciate. Even if the troops may not appreciate a gem of a song like “A Public Affair” or “Irresistible”, haha, I know that seeing Jess in short shorts and “singing” is definitely something to take their minds off of things, so nice work Jess.

– And just because I saw In Bruges this weekend, Colin Farrel in all his brooding man with drug problems hottness, haha: 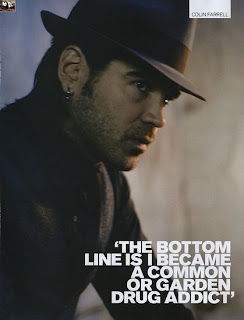