I mean seriously, did anyone watch last night and think that Whitney’s date was rude? He 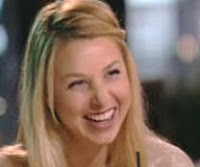 interrupted her several times (unless it was just MTV’s shiteous editing again) and asked her on a date that involved training…um WTF? Whitney is my favorite and Jaret or Jared or whatever the hell is name is was just not cool, not cool you hear me? Whitney you can do better than him, so do better. Go date some model from a photo shoot or a guy that’ll let you talk at least and not take you on a date running through mountains and working out. Oh. And one more thing. What trainer goes with his trainees to drink?? Isn’t that counteractive to training, the carbs from drinks and what not? It just seems weird to me. Oh well. Final point, move on Whitney, you’re much cooler than him.

And per usual, Spencer was a complete idiot and made some of the most

memorable and ridiculous faces whenever Heidi even mentioned the wedding. Now I’m not saying I like either one of them but I almost felt sorry (almost being the key word here) because Spencer was so far in his own world and seemed to not care about a wedding at all. I laughed so hard though when he packed their bags to go get married in Vegas…wow. Now if Matt ever packed my bags to go to Vegas I’d be happy, just leave out the “oh ya and we’re getting married there” part. And even when they were looking at churches, as soon as the pastor mentioned pre-marital counseling the look on Spencer’s face was pretty amazing (his faces are almost as good as Whitney’s, almost).

Other than that not a whole lot happened with Audrina or Lauren this week, basically they lived vicariously through Whitney’s “dates” with the trainer dude. However next week does look good when Justin Bobby kisses some other girl or what have you (he really does need to go, and take a shower in the process) aaaaand Spencer’s sister shows up, that should be goooood. Ah The Hills, always a good source of bad television and healthy laughter. Thanks MTV.