– Do not see the movie NEXT. Have you even heard of it? I barely had. Matt and I watched it

last night and I don’t recommend it. It was the most cracked out movie ever. Basically Nicholas Cage is a guy who can see two minutes into his future and the CIA wants to use him to track down where a nuke is going to be detonated. Ummmmright. It made no sense whatsoever, Nic had creepy hair, Julianne Moore’s acting skills were highly questionable and the plot made absolutely no sense. However it did make for a good laugh. So if you want to watch a movie and have no idea what’s going on and laugh about it all, watch it. If you want to spare yourself five bucks at Blockbuster, avoid this one. 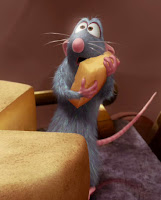 However do see Ratatouille. The Disney/Pixar combo has yet to disappoint me. It was a cute movie with some funness and goofiness of rats and French people. Although animated the food did look rather tasty too, maybe it’s just because I love cheese but still, looked good to me. Oh and the little preview short before it was pretty funny too “Your Friend the Rat.” There were a couple laugh out loud parts so I do recommend this movie to watch, woot.

– Eva Mendes looks amazing in the new Campari calender. I mean wow. I like how they did the spin on fairytales and made them quite modern…and alcoholic, haha. However I must say that my favorite one of them all is my favorite cartoon, Aladdin. 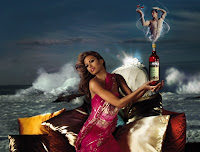 – Thank goodness Lauren and Audrina found some new guys to hang out with. Hopefully last night’s partay at Opera will show up on the show since apparently Audrina was making out with some new dude even though Justin Bobby was there and Lauren made friends with Shawn Pyfrom from Desperate Housewives, sweet. 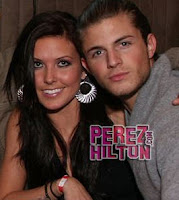 – Why does Britney need so many chandeliers? I mean honestly. Is your house that dark? Are you that in need of sparkly things? Do you need a new way to blow off money? And speaking of Britney, her album didn’t seel the #1 spot, the Eagles beat her out. I’m impressed she even sold that many. Now I’m not saying the girl doesn’t know how to make good danceable music (cause she does I have some of the new tracks and they’re pretty fab) but she doesn’t know how to sell shit anymore. Gah. I don’t know why I’m still talking about her. I used to love Brit Brit, but now that she’s a whole bowl of crazy I just can’t like her like I used to.

– The Writer’s Strike needs to get its shiz worked out. Come on big execs. Give the writers what they want so we can get our TV back. So many shows are already stopping production and most talk shows have already gone into reruns. So fingers crossed that the big wigs can get their act together and pay up to the writers, cause we all know they deserve it.