Am I really about to post about Jen Garner and not mention Violet? Okay well that didn’t last long, I mentioned Violet, but sadly I have no pictures of her to share. However I do have two amazing pics of the lovely Denison alum (holla) Miss Garner. She’s been all over the place promoting the heck out of her new movie The Kingdom (which has gotten great reviews by the way and I may have to go see it) and yesterday she went to the Today Show and then last night she was at Letterman. And not only does she look amazing, but I love that both of her dresses have pockets! Pockets are seriously the coolest thing ever! I love pockets! haha. Okay and I love the color of both dresses and I would totally rock them both.

Aren’t they lovely? I want them? Jen where do you shop?
Moving on. So since I don’t see any Violet pics to share I’m sharing a pic of the next best celeb baby out there…Shiloh (okay she’s tied with Suri and Kingston, don’t throw a hissy fit, haha) 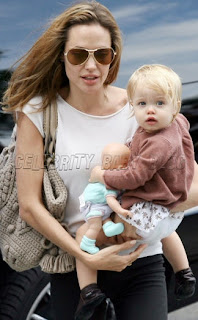 Presh!
And another Hollywood lady that’s finally making some positive noise is Brit Brit herself. Her song “Gimme More” is now the number song and number one ringtone on Itunes! Crazy, I know. But you gotta give it to her that she knows how to put out a poppy song that all will love, let’s just not watch her perform it (ah VMA flashback, help, ah!).

Oh! And before I end this post, a brief recap/my two cents on the shows I have watched since Tuesday….
Top Model: Lisa is still my fave. Saleisha is a close second. I feel like Tyra is keeping Heather (the autistic girl) there out of sympathy (which is unfair to her) and thank goodness Mila left (she was waaaay to high on happy pills).
Criminal Minds: Well I already knew that Gideon was going to leave and they basically built it up this episode. The guilt from losing his friend in the season finale caught up with him when they were on a college campus that had a crazy killer loose. And he basically voiced over the whole episode with a letter he was writing to someone (we never find out who it’s too) which could be interpreted as a suicide letter since the episode ends with him holding a gun (gah!), so we’ll see. His real final episode is next week apparently and it should be goooood.
Private Practice: I actually haven’t watched it yet. It’s sitting on a tape in my VCR waiting for me to see it. I saw the beginning and the very end and it was ok. I have heard many reviews that it just wasn’t that good (but it did get the highest ratings for a new show so far). So I’ll have to wait on that one.
Grey’s Anatomy: Oh Grey’s. Well I must say that the premiere was much better than I expected, not nearly as depressing and sad as the finale that’s for sure. They barely touched on Addison leaving, Cristina found out through Derek that Burke resigned and skipped town, Meredith’s sister and George became friends, Karev misses Rebecca, Mark tries to be Derek’s friend again (which is super cute and you actually like Mark for once as a character and not just McSteaminess), and Meredith and Derek “break up.” So all in all I was pleased with the return of my favorite show even if it did lose out to CSI:, I think ratings are kind of crap anyways.
Without a Trace: So good. I love this show. Although I was super tired, I stayed awake for the whole episode. Basically a little boy was kidnapped from his family and they got him back (in a nutshell). And they also talked about the missing waitress from the season finale, yet didn’t resolve the case (I see this is going to be an ongoing story…oy). But I liked it. Woo.
CSI: I actually haven’t seen this one yet either (it’s waiting to be watched on Matt’s DVR). But I have heard great reviews and interesting twists. So I’m looking forward to that.

So now that I have blabbed on and on, it’s time to get my ass back to work. It’s Friday! Woo!