Christian Bale is everywhere! (and I love it)

Christian Bale really is everywhere these days…and I am not complaining at all. I have loved him since his days as Jack Kelley in Newsies, so seeing him mature and age on screen has only

made me happier and like him more. He has managed to stay out of scandal and in lots of good movies. His newest released film (besides Rescue Dawn) is 3:10 to Yuma. I saw this preview a while ago and I can’t say that I totally understand what it’s all about it, but it looks pretty good for a western flick. And what 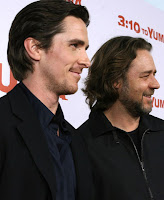 makes this movie even better is that Russel Crowe is in it as well…although I haven’t been a huge fan of his since his Gladiator days, I am looking forward to him in this movie and American Gangster with Denzel coming out soon. Anyhoo, Pop Sugar is awesome and posted several pics of Christian and Russel, and a plethora of other people in the movie, so I thought I’d just share my two favorites.

And on top of the premiere photos, Buzz Sugar (a part of the Pop Sugar empire) has tons of new pictures up from The Dark Knight! It just kills me that I still

have to wait a whole year for this movie to come out, but oh man, I can’t wait. I even saw the “preview” for it when I went to the movies a couple weeks ago and it’s such a tease (hence called the teaser trailer, but still)! The pictures look gooood, Christian looks hawt (as usual) and Heath Ledger looks so creepy. Man I was creeped out the first time around when Jack Nicholson was the Joker, Heath is starting to look just as scary, haha.

Anyhoo, only a year to go til the bat in black in back (woo hoo alliteration)… I can hardly wait!