So I found it entertaining that I returned to the office today with tons of stuff to do and several emails to read, however the one that stuck out most to me was sent by my friend Allison entitled “Why the lunch break is going extinct.” Haha, that basically sums up my office life right there. For some reason (okay not some reason, I just like saving money/being healthy and bringing lunch from home) I knew that I would be writing about that email and everything else that’s happened the past three days during my “lunch break”, haha.

The article basically sums up the fact that less people are leaving on lunch breaks and utilizing that time to answer emails, catch up on invoices, etc, etc. I, however, like to use my lunch break to have some time to myself. Ever since I got in this morning I have been on the go non stop working on my various assignments (which is totally okay with me, I knew it would happen like that since I wasn’t here yesterday), so I am using my “lunch break” to eat my leftovers from last night’s fabulous (and pricey, haha, but so worth it) dinner and catch up my loyal readers on the perils of Katelin and the must know happenings in Celebrityland. So here goes…. 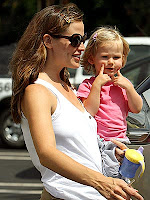 And Debra Messing’s dress is pretty fabulous in my opinion. I think I am really just a fan of the radiating purple, it’s so fetch (haha yes I said fetch, and yes I am using it sarcastically). But really, I think this color looks good on her, she could have done more with her hair and maybe not as ginormous of a purse, but the dress, I give it two thumbs up. Woo.

And apparently Superbad was really funny and basically rocked the box office. So that’s another movie to add to my never ending list, haha.

And in TV news, The Hills. I made my boyfriend DVR it last night so I could watch it when we got back from dinner and man that show flies by when you fast forward commercials, haha. I swear, it felt like nothing happened. Except for my favorite part was Heidi painting over Spencer’s ridiculous “art work.” As much as I don’t like either one of them, the fact that Heidi actually stood up for herself was great and the look on Spencer’s face pretty much paralleled Heidi’s when she first saw his wall decor, it was amazing. Other than that Audrina’s “boy toy” came off as a rude stoner and would look much cuter if he cut his hair, Lauren was trying to like said boy toy but he was rude, and um I think that’s about it. I may have missed some in there, but probably not. Oh but next week’s looks even better…stay tuned.

Other than that I don’t really feel like chatting up the Hollywood Buzz today (the horror!). But apparently the only big news is that Hayden Pantierre (however you spell her name) turns 18 today (big whoop), K-Fed is going to be on One Tree Hill, and having a family changed Matt Damon’s life, haha.

And that’s the Hollywood wrap up of the day.

In real life news, I went up to Salinas, CA this weekend to visit my extended family and it was great as always. Perfect weather, tons of food, lots of family, several birthdays and time spent with great people. And I loved having yesterday off. Granted it is making today much more chaotic, it was worth it.

Okay well this was a very ramblingish post, maybe later tonight I will touch it up or just write another one, haha. But for now, time to get back to the grind.