Chris Tucker has got to be either one of the smartest or laziest guys in Hollywood. After listening to Kevin and Bean on the radio a couple days ago and I was intrigued to Imdb Mr. Tucker. And after doing so I discovered that Chris Tucker has been in 10 movies, 10? 10! 10. That’s it! just 10 movies. His first movie was 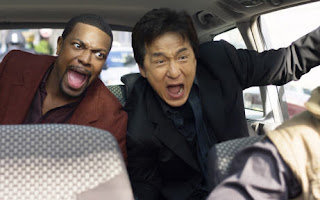 House Party 3 (which I have never even heard of) in’94 and from there he went on to do more memorable movies such as Friday, Dead Presidents, The Fifth Element and Jackie Brown. However, in my opinion, his biggest winner (and status booster) was Rush Hour, which came out in ’98. And a fun fact to go along with that, Chris got paid 3 million for Rush Hour, which is not too shabby. So after Rush Hour Chris didn’t do anything until Rush Hour 2 came

along in 2001, where he got a nice pay increase to 20 million dollars! Haha, ya that’s not too bad at all. Now as most of you know Rush Hour 3 just came out last weekend, six years after the last one, why such a long delay you ask? Much speculation (and some reported fact) was that Chris Tucker was negotiating a pay check?! Chris Tucker wanted more money!! For what?! He did nothing after Rush Hour 2 and was asking for more money? Now I like Chris and all, I think he is pretty funny, but I think it’s ridiculous he wanted more money when the only reason he is a “big name” is because of the last movie, gah. Well obviously the studios gave in and Chris got something like 25 million plus some revenue of the movie sales, pshaw. Well Chris it was nice seeing you in Rush Hour 3 I guess we’ll have to wait another six years for you to pop up in a movie and make a name for yourself again, haha. Or you can just retire now, spend your millions and avoid getting arrested again.