So just to add on to yesterday’s post, I just read this on People.com:

Even Kanye West occasionally battles overzealous doormen, apparently. The superstar rapper got held up as he arrived at a release party for his friend (and protégé) Common. The rapper was celebrating his new album, Finding Forever, which West executive produced, at a Target-sponsored bash at One Sunset in Los Angeles. Once security realized who he was, West was whisked right in. Also inside, Common offered a big handshake and hug to his Smokin’ Aces costar Ryan Reynolds, who matched the guest of honor in a grey newsboy cap. “Ryan’s been my guy since Smokin’ Aces,” Common told us at his party, adding that his album release is “like the birth of a baby.” Meanwhile, Serena Williams and Will.I.Am. munched on hors d’oeuvres and listened to beats spun by the Roots’ drummer ?uestlove.

Well I guess my celebrity radar wasn’t fully on because I definitely did not see Serena there, haha. Or maybe I did and just didn’t know it, who knows.

And as promised, Megan and I with Common: 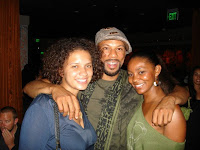