I know, I know I blogged about politics (weird) and just randomly went on a tearfest of memories. But alas, the Kate you know and love is here with the latest celebrity pictures and news, woo. I was going to blog this earlier but I actually didn’t see anything I just had to put up, however, Celebrity Baby Blog has changed that one by putting up a clip of my favorite SVU detective, Elliot Stabler (okay his real name is Chris Meloni, but I just heart Elliot Stabler, I can’t help it, haha). So here’s part of the spread from the August issue of InStyle Magazine of him and his son at their lakehouse, lovely: 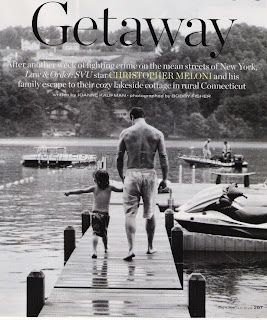 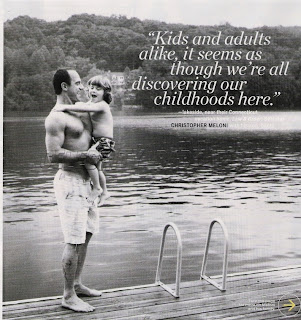 And in other random celeb news, Suri Cruise is so freaking cute. I mean really. She just gets cuter every time her picture is taken, how is that possible?

Aw, she’s even got a Maggie Simpson fan to keep her cool at the Galaxy game, presh.

Oh! And just in! DREW CAREY (yes you read right) is taking over for Bob on The Price is Right. Apparently CBS didn’t get the memo I sent around that said “Pull the plug on the show, Bob is gone, the show is over, quit while you’re ahead”, they’ll just have to learn the hard way I suppose. But really, nothing against Drew, I just think the show should end. After going to a taping two years in a row I can’t really imagine anyone else doing the show but Bob, I mean who else would say “The Price is wrong bitch” for the audience or be “surprised” when he got a standing ovation every time he entered the room? That kind of reaction just can’t be duplicated, sorry Drew, but it can’t.

Well that’s about all I got for Hollywood right now, check back later, I may be compelled to blog again, haha.