At about 10:32 last night I looked and my boyfriend and said “Aaron has 28 minutes to make me not hate him the rest of his career.” Yes I am talking about Studio 60. Sadly this is my last entry on the show because last night was the series finale. So as I said before, at about 10:32 I was still pretty distraught about the show. Nothing was being resolved! Jordan was still heavily medicated and not lookin too hot, Tom’s brother was still in captivity, Simon was still in a room with Jack with unresolved issues about his outburst to the news crews and Matt and Harriet still weren’t together! I was pretty much flipping out.

However by about 10:40 my fears were put aside and Aaron did good. He pretty much wrapped everything up nicely with a big bow on top. Just when I thought they were going to kill Jordan (ya I had a pillow ready in hand to either cry into or throw at the TV), the doc says everything is going to be fine and Danny shows up with baby in hand to show Jordan. And even cuter, Jordan had adoption papers already ready for Danny to sign, adorable. Then finally, just when Tom was about to give in to hiring ransom negotiators the army rep who had been with him hands him the phone and Mark (Tom’s brother) is on the other line, alive and well and rescued, sweet. And finally Jack admitted that he felt bad for firing Matt and Danny five years ago and that he had nothing wrong with them, it was just part of the job. So with that he told Simon he didn’t have to apologize…so of course Simon finally agreed to apologize.

And lastly, the build up of them all. Matt and Harriet. It’s been building up all season and it finally came together, granted I don’t know if I would have made it like Aaron did, but it worked anyways. Throughout the episode both Matt and Harriet admit to other people that they are the only ones they have ever truly loved (awww) and from there they slowly realize that there is no reason for them to not be together, religious differences or not. So basically Harriet comes back from the hospital and Matt is sitting in the stairwell relieved that the ridiculous night is over and he mutters “Thank God” and Harriet comes back from the shadows in a deep voice saying “Your Welcome.” Haha, I thought that part was pretty funny. From there, some words were said and they kissed and got together and asked everyone if they would mind if they were together and of course everyone said “No”, all basically knowing that it was inevitable.

And the show ended with Danny smoking a celebratory cigar and Matt up in his office vowing to make a friend out of the giant timer in his office that lingers overhead. So I’ll say this, I don’t hate Aaron Sorkin anymore, granted I got pretty close. He did a lot in 28 minutes that restored my faith in his story line skills and that made for a much happier Thursday evening.

Well, goodbye Studio 60 on the Sunset Strip, it was a good run. 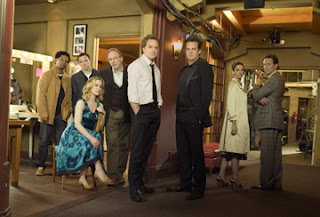