So clearly I didn’t post a Hollywood post yesterday (for shame!) and it’s really because being gone most of a week makes it nearly impossible to stock up for a post and write all about it and just yeah, it wasn’t easy. And then having so much to do Monday night made it impossible to write something, so yeah I apologize, I know you reallllly wanted your Hollywood scoop. And to make up for it, I’m taking a new approach at Hollywood today by simply sharing some of the biggest stories of the week and my reaction to them, because clearly that’s what awesome people do (and ridiculous people). So, here we go:

The Garner/Affleck family out and about. Really not a story but rather just a excuse for me to share the cutest family in Hollywood (I mean seriously, it’s hard to top their cuteness). And they’re all together, doesn’t that just make you say “awwwwwwwww”? 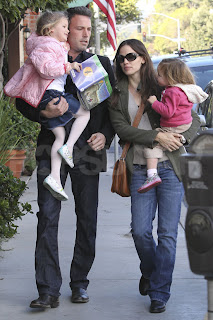 Ann Hathaway and James Franco are hosting the Oscars. UM. Excuse me? I mean I know Hugh was busy (seriously I could watch him host any time) but really, that’s who you came up with? No offense to Ann or James but really? Really!? I get you want to target the younger crowd but why not Tina Fey or Neil Patrick Harris, they’d both be awesome and they’re funny without really even trying. And what if James is nominated next year? That’s just awkward. Anyways I guess I can’t judge just yet, but hey Academy if you’re looking for hosts for 2012 I’ll totally try out for the job.
Spider Man the musical sells a million dollars in presale. Yes because when I first think of Spider Man I think MUSICAL! Don’t get me wrong, I love a good musical but I really have no desire whatsoever to check out this production, maybe if it was Batman and Christian Bale was the lead, just maybe then.
Eclipse comes out on DVD Friday at midnight. First of all, YES. The Twinerd in me is way to excited to watch this movie again. But the old person in me is like “what the eff? why a midnight release of a DVD?? I am not fighting crazy tweens for my copy at Target.”
Glee – Furt. I’m a week behind, but I sort of loved Sue. Her dress, standing up to her mom, protecting her sister, sort of standing up for Kurt. It was just a mushfest and I liked it (well most of it). But um Kurt leaving? Not so cool, not at all. What is that saying about bullying? Leave? Run away? Tell everyone what really happened Kurt! Please!? I mean yes it’s hard and I get it (and I know this isn’t real life) but you just can’t leave.
Johnny Depp in Vanity Fair. Not much to share their either except his interview is pretty interesting since he’s such a private person. Also, he’s swoony in that “maybe he’s dirty, maybe he’s really tan, brooding, mysterious, crazy” sort of way. 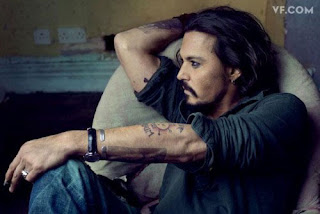 And that my friend’s is a bit of Hollywood with a dash of reflection, schnazzy pants. So anything else big I might have missed? Let me know!
happy wednesday!