So although my Top Ten lists have sort of been halted, let me share with you the order of my musical loves.

Let’s just stop there because ohmygod I love O.A.R. I mean when Craig and I were on a break (ie when he didn’t come to the US for seven years!) O.A.R. became my favorites. So basically let’s just say they’re in a tie with Craig. Anyways, I heart them. Big time. I’ve seen them six different times in four different states and I’ve loved each and every time. Although last year’s concert may have been the best because it was at Club Nokia and I got to meet Marc, the lead singer, after the show, so yeah that was nice.

So when I got an email yesterday telling me that O.A.R. had tacked on an LA show to their summer tour (that was originally East Coast/Midwest only) next Friday at the Wiltern, I bought my tickets in less than five minutes and then proceeded to tweet this: 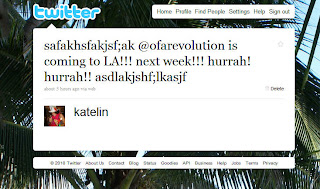 Needless to say I freaked out, texted my sister and Matt and wrangled them into coming with me and got all sorts of giddy. But it didn’t stop there. I then decided that I should start prepping and listen to O.A.R. all day and then tweeted this: 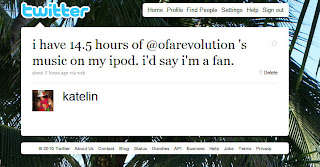 And a couple hours later when I got back from lunch I was surprised to see this in my twitter feed: 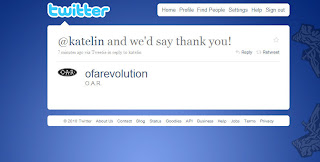 UM SAY WHAT!? O.A.R. responded to me! And they thanked me. And I may have fangirl freaked out a bit because um that’s just awesome. And yes it’s just twitter but I know that Ali and Ben will at least appreciate this twitter response, right? right?

So pretty much that made my day and I cannot wait to see them in concert next Friday (want to come too? Buy tickets here!) and it will truly feel like summer and ah! Heartface!!

Also, if you don’t know their music. You should. Like stat. Check out their site here. Also, you should probably know “Hey Girl” and “Crazy Game of Poker” and “Love and Memories” because they’re all sorts of amazing. Okay? Thanks.