Cloudy with a chance of pancakes.

Another loverly weekend? I think so.

Friday: Was hoping to see my little brother’s basketball game finally, but it was canceled due to a leaky pipe in the gym (example one of the rain changing my weekend plans). So instead, me, Matt, my sister, Brad and my little brother Kyle went to dinner at IHOP. Ever since they started airing those never ending pancake commercials I’ve been craving pancakes, so we went and it was glorious!! I ate so many pancakes I even surprised myself, haha. After our breakfast dinner we all came back to play a rousing game of Uno and cards and just had a good time all around.

Saturday: Well we were going to see Avatar (I promise) but Matt’s mom’s house started to flood (example two!) so he went over to clean up and keep watch most of the day. While Matt was doing that I caught up on the DVR and then cleaned the apartment like it was my job. I vacuumed behind the couch, under the couch, dusted, rearranged tables and bookshelves, I even decided to color coordinate our bookshelf, haha: 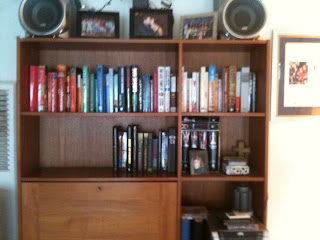 Eventually Matt came home and we were going to go see Avatar just a wee bit later, however our neighbors invited us over for fajitas and games and that was just a wee bit too tempting to turn down for some blue people (also note, Avatar viewing has been rescheduled for tonight, woo!). So we had delicious fajitas and played Scattegories and Scene It! and just had an all around fun night again.

Sunday: Woke up to a bright and shiny day (I only say this because my goodness was there downpour on Saturday) and went walking at the Rose Bowl with Matt. After the nine mile workout I was pretty lazy until I drove to USC to pick up my friend Liz for the day. It was so fun to hang out with her and catch up and be girly and walk around Old Town and try on funny headbands…. 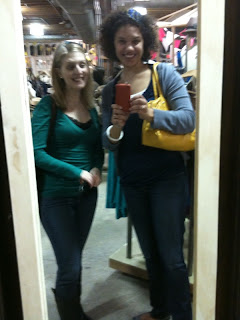 I may have to go back and
get that peacock
headband.

Eventually we went to dinner at Mi Piace, which had some freaking fantastic lasagna I must say, then came home to watch the Puppy Bowl (how freaking adorable was that!!!?) because we missed the Super Bowl (woo Saints!). And before I knew it, it was time to take Liz to the airport and the weekend was officially over.

At least it was a fun one! And how was your weekend? Survive the rain/snow/sleet/tornadoes/wind?