All about the weekend.

So another weekend has come and gone and as always it happened way too fast because I am not quite ready for today to be Monday. So weekend, here we go…

Friday: Made a delicious dinner with Matt then sat back to watch some DVRed shows and drink some wine. However I got a text from my aunt and uncle asking if we wanted to meet them at the bar and we were all over it, haha. So we went out for some drinks and had a great time before coming back home to hang out with my sister and her friend Jess and we played some Movie Fact or Crap and then some Scene It for the Wii again and it was all sorts of awesome.

Saturday: Woke up to do some Wii Fit and EA Active (which kicked my butt, ohhhhman) before getting a start on the day. Matt and I had a delicious lunch at the Counter. If you’ve never been to the Counter then you are seriously missing out, it is all sorts of deliciousnes. After running some errands I headed over to Tara’s fabulous Degree Red Satin party to watch the SAG awards. 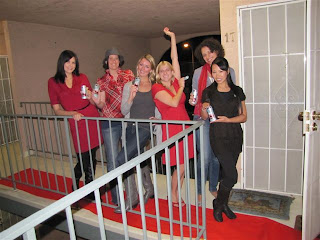 some of the ladies on the red carpet to Tara’s place.

I was seriously on cloud 9 to watch an awards show with other people and the fact that it was fun people and I got to see Tara and be all girly and get a manicure and fun schwag and some Degree deodorant. Basically it was a loverly evening. Afterwards Matt picked me up and we went down to Redondo to hang out and have dinner with our friend Mike and his girlfriend and his friend and we went to Buca and it was delicious and more wine was consumed and laughs were had and basically an all around great night.

Sunday: Slept in til 10 (I almost forgot how wonderful that feeling is) before getting to work in the kitchen to help Matt make some goodies for football watching. Basically did that, watched a bit of football with the crew, then walked nine miles, holy soreness, haha. The rest of my night was spent not walking, actually watching shows on the DVR and just relaxing and it was heavenly.

And how was your weekend? Loverly I hope!