Pinch me: My Dazzling weekend revealed.

As I mentioned on Friday my weekend was very top secret and all sorts of amazing. So without further adieu the wait is over and I present to you one of the greatest weekends of my life! (my birthday weekend of this year is still the number one slot, obviously) *and note, it’s a bit lengthy*

Friday: After work I headed to the west side for a very special event. I went to a press screening of The Twilight Saga: NEW MOON. Yes the New Moon. I got there, signed in, got a wrist band then got some free popcorn and a drink (I need to go to press events more often!), it was awesome. It was pretty cool to be press and I actually recognized some of the people there from local TV news channels and what not and it was just a really interesting feel overall. But the most important part, the movie!! Unfortunately I can’t technically give a review of it yet or how I felt about it but um let’s be honest it’s not that hard to figure out if you know me, haha. And why and how did I see New Moon you ask? Well that’s what Saturday is for.

Saturday: I slept like crap on Friday, kept waking up, my stomach was a whole bunch of nerves and I was just too excited for my day. Eventually it was time to go and I was on my way to Beverly Hills. I arrived at the hotel, valeted my car and saw a slew of paparazzi hanging out on the street as I made my way inside. After asking where I was supposed to go I made my way to the elevator and to the right floor and ultimately to the hospitality room. Turns out I got there too early (not my fault though!) and they were just going to fit me in the schedule however it worked out which was fine for me. And what schedule you ask? What was I doing in Beverly Hills?

Only interviewing THE ENTIRE CAST OF The TWILIGHT SAGA: NEW MOON!!!!!!! Did you get that? Do I need to repeat it again? INTERVIEWING THE ENTIRE CAST OF NEW MOON!!! Haha, yes it did need repeating because it still doesn’t totally feel like it happened. Now even if I wasn’t a New Moon fan I’d still be dying because interviewing celebs is always something I’ve wanted to do, but the fact that it was for New Moon didn’t hurt.

By an amazing set of events I was sent to interview the cast at the official press junket on behalf of AT&T. Yeah I just about passed out when I first found out on Thursday and had to reassure myself that it was really happening on Saturday. So now I present to you the day!

After they figured out where to send me I made my way over to wait to interview the director, Chris Weitz. When I finally got in to see him it was pretty surreal and just how I had envisioned it all. And the interview went great, Chris was incredibly nice, had some great answers and was just a really fun way to start off my day. After Chris I was sent down to Kristen’s room to wait. As I was waiting the door to Rob’s room (which was right across the hall) opened and out walked Rob Pattinson and a small entourage. Yeah I may have melted into my chair. After my Rob encounter I was sent down to another floor to interview the Volturi group (fine by me!). The group consisted of Dakota Fanning, Michael Sheen, Jamie Bower and Cameron Bright and they were great. Really sincere, pretty talkative, great handshakes. Yeah it was pretty fun to interview them I gotta say. After them was my favorite interview of the day, the Wolfpack (Chaske Spencer, Kiowa Gordon,Tyson Houseman and Alex Meraz). Seriously these guys were just so fun to talk to, they had a lot to say, obviously loved hanging out with each other, love the new found attention and knew how to make a great interview. And they even asked me questions before the interview officially started which was great, seriously best interview of the day.

After I finished with the wolf pack we were on a break for lunch. So I went upstairs to check it out a bit and who is in my elevator? Kellan Lutz and Peter Facinelli (oh hellooo gentlemen). I wandered around a bit before finally deciding to head downstairs and outside for a bit. So I’m hanging outside on my phone and who do I see outside? Chris Weitz with his wife and kid moseying around outside as well. As I looked over his way he waved at me and said hi and I waved back and felt pretty cool in the process (yes I am a huge nerd if you haven’t figured this out by now, haha). Eventually I headed back inside and hopped in the elevator to grab some lunch and who’s in the elevator with me now? Nikki Reed and Elizabeth Reaser! Seriously the elevators were magical, it was like I was Grey’s (which is so appropriate since Elizabeth was on it, haha). After lunch it was time for another elevator ride with Nikki and Kellan as I made my way down to interview the Cullen family.

The interview with the Cullen’s (which consisted of Peter, Elizabeth, Kellan, Nikki, and Ashley Greene) was a little hard since they really aren’t in New Moon all that much, but it was still incredibly fun to talk to them. And seriously they are all so good looking it’s crazy. Afterwards I was sent back upstairs to finish off the day with the holy trinity, haha. Seriously I loved my schedule it was perfect.

First up with Kristen Stewart. 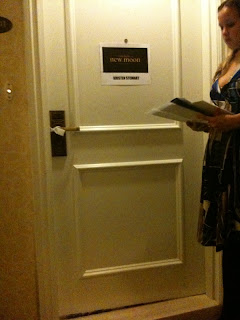 I have to admit I was really nervous to interview her since she is notorious for being awkward and giving short answers. But she was the complete opposite it was amazing! She was so talkative and assertive and totally listened attentively when I asked questions. And on top of it she looked super cute! Her hair was done back, she was in a cute blazer and yeah she just looked good, I was so impressed and so happy and I definitely look at her in a whole new light now.

After Kristen I went across the hall to wait for Rob Pattinson. 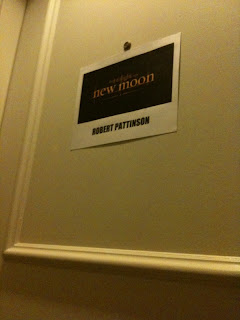 I’m pretty sure I looked like I was practicing lamaz (is that how you even spell it? Eh whatever) as I waited in the hallway for Rob. You’d think after interviewing so many other people before him I’d be fine, but I was still just so excited and a bit nervous and man, exciting. So finally they call me in, I shake his hand (like I did with everyone else that day, woo), le swoon. Other than that he looked just lovely in a gray coat and typical Rob attire. He did look a bit sleepy and he had a cup of coffee in hand so I guess that also attributed to his soft spoken responses as well. But he was incredibly sweet answering my questions and elaborating when I asked him and yeah just awesome. I didn’t get to ask anything too scandalous or crazy but it was fine enough for me. And his British accent really is dreamy, I may have had some inner swoons going on the whole time, just maybe, haha.

After Rob it was down the hall to my final interview of the day, Taylor Lautner. 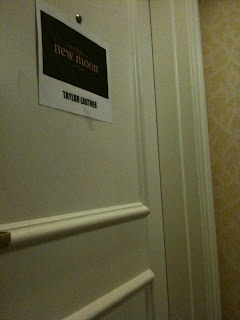 Seriously how is this boy only seventeen? He was so professional and charming and just darn adorable, I loved interviewing him. He wore a dress shirt and a skinny black tie and just looked good. He made me laugh in the interview and he smiled a lot and his teeth are so white it’s amazing, haha. No but in all honesty I was so glad to end my amazing day with him because talking to him was just easy, so major props to Taylor.

After I was done talking with Taylor I grabbed my tapes (in my new New Moon tote bag) and was on my way.

So was my secret weekend up to par? :)