So I told you I’d tell this story eventually right? Hollywood news just has to wait another day because before my life got uber exciting and engagedlike I ummmm met Joshua Jackson!!!

So how did this all happen? Let me share.

My mom’s friend got me tickets (that my parents paid for, Happy Birthday to me!) to the Paley Fest presentation of Fringe. Basically every night for two weeks a different TV show is highlighted and different cast members and staff of the show come and speak on a panel and last Thursday night just happened to be for Fringe.

So Matt and I sat with my mom’s friend and the show started. A special clip was picked to start off the night and I almost died of laughter. It was from the “Breakfast Club” episode of Dawson’s Creek when Pacey mentions Mighty Ducks. Seriously, priceless.

After the clip was shown, a full episode of Fringe was aired. Once the episode was over people clapped and I looked over to the doorway near me and there was Joshua Jackson. I almost died of happiness right there! But then Josh ran back in to be appropriately introduced, haha. The moderator of the night was a writer for Entertainment Weekly and he introduced JJ Abrams first and then a writer and a producer or something and then Ana Torv (the leading lady of the show) and before I knew it out came Joshua Jackson again! Ah! Heart! Yay! And last but not least, John Noble (who plays Josh’s dad on the show) came out. 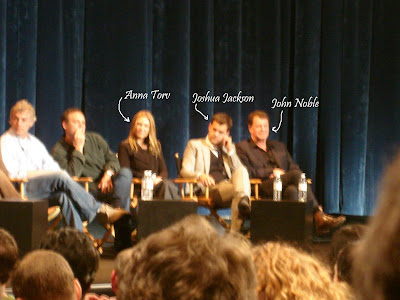 The whole panel was great. Joshua Jackson is hilarious and witty and ah, I am an even bigger fan now it’s that’s possible. JJ Abrams is so young looking. John Noble is pretty ridiculous too. And Ana Torv seems so fragile and cute and I heart her too.

Once the panel was over everyone rushed the stage to get autographs. I tried to get up there but it just wasn’t happenin, so I took pictures instead. And I tried to get through to shake Josh’s hand but that wasn’t happening either. And he wasn’t taking pictures with people so I was sort of bummed, but I totally understood, way too many people. 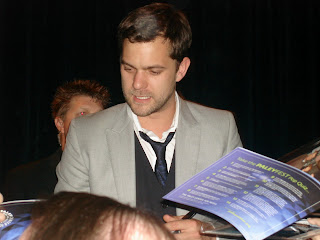 he was signing away, what a nice guy 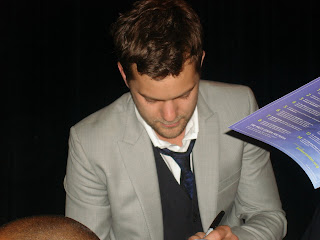 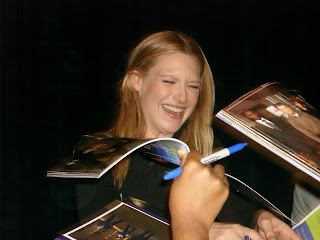 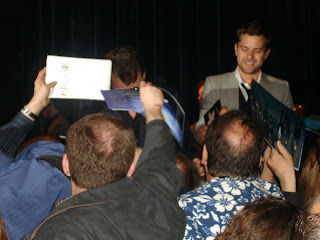 However, luck was on my side! I found a spot right by the exit and as Josh was leaving I yelled out “Josh!” and he looked over at me and I said “I just want to shake your hand I’m a really big fan” and he shook my hand and said “Thanks for coming out, it’s great to meet you” and he smiled and I was giddy and swooning and Matt was laughing at me from afar and then Josh was out the door.

But OHMYGOSH I MET JOSHUA JACKSON!

That statement alone is aweosme. I shook his hand. I said hello. He talked to me. He smiled at me. Seriously amazing. Meeting two of my top five in two weeks, yeah I’d say that’s sort of awesome. And heck I’ve met three of my top five in the past six months, man I love those celebrity gods.