A weekend with lovely weather, a trip to London and a friend with antlers.

Another weekend come and gone already, I mean really. Granted I will say that my weekend seemed to slow down a bit which was nice, but I miss it already. Anyhoo, on to the weekend recap:

Friday: Got home from work and Matt and I debated what to do for dinner, in the end Yard House won. Seriously this place is phenomenal. I had the mac and cheese simply because after Jamie posted a picture of hers earlier that day, it was all I was craving, haha. It was fun to just hang out with Matt, watch some basketball and have a delicious meal. Afterwards we came home and just relaxed. I was a little too full to move so we just caught up on the DVR and hung out. Twas loverly.

Saturday: Woke up earlyish to some unfortunate news which has had me thinking ever since and being grateful for all of my friends and family. Once I woke up a bit more I had some serious plans to run errands, but all of that went out of the window when the weather turned out to be amazing and Matt took the top of his jeep. So we stopped by the libary so I get a new book, then made a quick stop to England. No really, we went to England, I have proof!

because there’s only phone booths
like this in London, haha 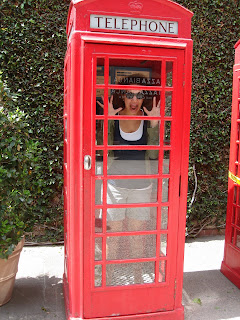 Haha, I wish. We went to Williams Sonoma to use a gift card we’d had forever, got some schnazzy kitchen stuff and yeah. After the store we just drove, it was awesome. I got to see houses I would love to own, peacocks on the street, we made a pit stop at the mysterious Fresh and Easy and yes it is awesome and all in all just had a lovely time.

After we got home we played the Wii a bit and just hung out and had fun before we headed over to the West Side. Matt and I met up with my friend AJ and his friend Tiffany and went to dinner at Kate Mantilini, in a nutshell: delicious! Seriously the place is so tasty. We went there a couple weeks ago and the second time did not disappoint. After dinner we headed over to a wrap party for this short film. It was okay, didn’t know a whole bunch of people but this guy from Grey’s Anatomy was there so that was sort of cool. And um we took these pictures that I found highly amusing as well:

I said pose and that’s what they did 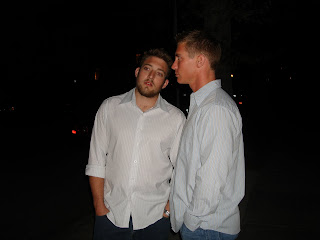 and then AJ grew antlers! 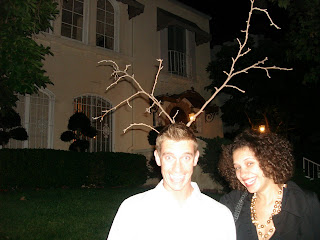 Haha oh good times. After the partay we headed to another bar for a drink which was fun but man I was exhausted by the time we got home and finally slept through the night, well sort of of.

Sunday: Woke up earlyish yet again then headed out to brunch with Matt and his dad. The weather was amazing again so Matt took the top of the jeep and we just took our time getting home and did a lot of scenic driving, it was loverly. Once we got home I took a mini nap then was off to the Rosebowl to walk with my aunt and uncle, gotta keep in shape! After that the rest of my Sunday consisted of showering, naps, pizza, Matt and TV, haha. I’m so exciting, I know.

All in all another lovely weekend and I can’t wait until the next one!

And how was your weekend? Do anything exciting?