The half marathon would have gone faster if I was with Edward.

Friday: Got home from work and went to grab some sushi with Matt for dinner (seriously I love sushi, it’s so delicious). Afterwards we came home to play some Wii for a bit and went to our neighbor’s to watch Ocean’s 11. I definitely got tired at like 11:30 and moseyed over to bed incredibly early making me feel oh so old but man I don’t care, I like my sleep!

Saturday: I set my alarm nice and early so I could go to Target and get myself a copy of Twilight. Oh yes, I am crazy. 8 on a Saturday is too freakin early to be up but I had to make sure I got a copy of the movie! Luckily I wasn’t the only crazy one because there was a line outside of Target, a line! So many of the women in line bee lined over to the Twilight display, it was hilarious. Even more hilarious, the woman buying six copies, six! Now I’m a fan and all but six copies is not necessary. I also felt better when I was in line and checking out with just Twilight and the woman in front of me was in her pjs too and just buying Twilight, oh I was not alone in my fandom. The funniest part of the morning though was when I got home and crawled into bed and Matt rolled over and said “shouldn’t you be going to Target now?” and I told him “I just got back!”, haha. Good times, good times.

After sleepin a bit more I eventually got up and ready for the day and headed over to Polkatots for the cupcake meetup. It was so much fun trying cupcakes and hanging out with Tara and other cupcake lovers. And the owner of the place was so nice too it was so much fun, a great way to spend an afternoon.

Post cupcake meetup I picked up my stuff for the half marathon and did some shopping, nothing like a new pair of jeans to make your day. After I finished my shopping Matt and I headed over to his dad’s house for a nice carb filled dinner and Twilight. Funny thing is, I didn’t even suggest we watch Twilight, but we did and I definitely liked it more the second time around. All in all it was a good night and I headed to bed early to prep for the big day on Sunday! ‘

Sunday: First of all, thank you to everyone for the awesome comments on Friday’s post about the half marathon. I was definitely psyching myself out a bit beforehand but when Sunday morning came I was ready. I woke up early, showered, had some oatmeal, did some stretches and was ready to go. Unfortunately the weather gods weren’t completely on our side but we made it nonetheless. There was some rain on and off throughout the day but when it stopped it was awesome. And after three hours and forty seven minutes we all finished! Wahoo! It was such a great feeling to finish it. And even better was that Matt surprised me and showed up at the finish line to cheer us on :)

I wish I had the pictures of us to share but the site hasn’t posted them yet and my sister forgot her camera cord. But I do have proof, my shirt with my number and my medal! I’m pretty sure it’s my first medal ever, haha. 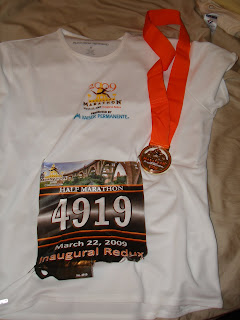 All in all I must say I’m proud of myself and of my aunts and my mom, it was a great thing to do together and I can’t wait until the next time.

After the half marathon I headed home, had a pizza and took a nice nap. Afterwards all the ladies (and my uncle) celebrated our half marathon finish at my aunt’s house with tacos and Twilight (oh yes I watched it a second time). It was the best way to celebrate I could ever think of.

And that my friends was my weekend, Twilight and a half marathon. Love it.