So first of all, the Garner-Afflecks finally released the name of their new little bebe girl and who am I to NOT tell you that one. Violet’s new little sister’s name is

I, although probably biased, think it’s a cute name. Now I don’t know that I’d name my future kid Seraphina, but still it’s cute and congrats to the happy fam! :)

Anyhoo moving on to something totally unrelated to celebrity bebes and their cuteness… the Super Bowl! (see, I know you were wondering what the hell was up with that title and now it has meaning, haha).

Haha, yeah that was an awful transition but really I’m going to talk about the Super Bowl. Now I really don’t care too much about pro-football, I’m more of a college ball girl myself, but Matt was into it BIG TIME this year because he was in a fantasy football league. So I actually got to know some of the pro players and teams and what not and sort of started to like it, sort of.

Nonetheless, even if I didn’t like pro football I’d still watch the Super Bowl. I mean how could I pass up watching amazing commercials, nip slips, drunk fans and hanging out with my guy friends as they scream and cheer at the game. Basically, Superbowl Sunday is awesome.

And you know what? It’s going to be a little bit more awesome for someone this year. Because I’m giving something awesome, courtesy of the lovely Tara, the Ultimate Super Bowl Party Pack!

And what is in this party pack you ask? Well, let me tell ya: 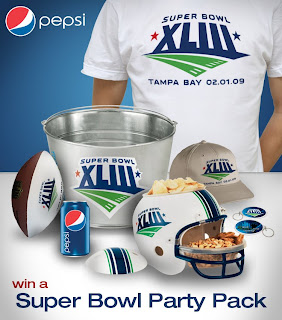 I mean really, how sweet is that? You’ll have everything you’ll need for a grand ole Super Bowl party! (minus the alcohol of course, haha). And what do you have to do to win such a rockin prize? Simply leave a comment telling me who your football team is (college or pro) and why? And to get an extra entry tweet about the contest or post about it on your blog and post it in the comments. Woot!

I’ll pick a winner at random next Wednesday, January 21st, so get going and good luck!