I love Christmas. Have I said that before, I forget? haha. Clearly I was in the Christmas mood for a long time and I can’t believe it’s come and gone already. Anyhoo I didn’t post on Friday because man I was just too tired, but Christmas and the weekend were amazing and I loved it all. So here’s the recap in short (at least I’ll try) and with plenty of pictures…woo!:

Thursday: Christmas! Matt and I woke up early to share our presents with each other and do our own Christmas. It was so fun. Our tree started out looking like this which I loved: 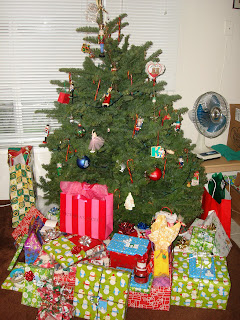 Matt and my fam on Christmas, so cute 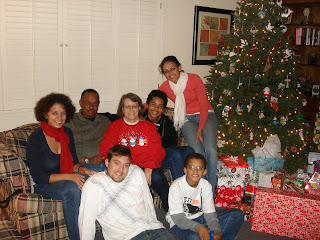 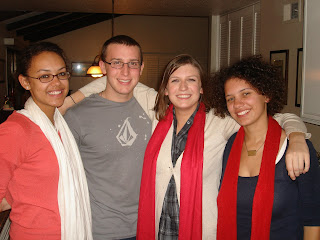 love this picture,
apparently something was hilarious 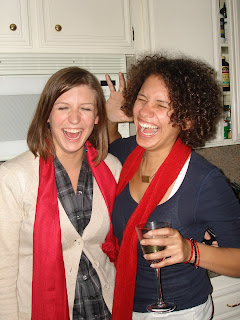 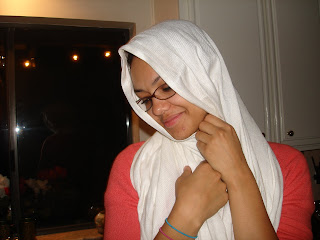 Basically it was a day spent all over the place but I loved it (even if the weather was less than agreeable). And Santa even gave me some of stuff off of my list which is always nice too:

Santa got me a picture of a Wii with money to Best Buy behind it
and Matt got me the Twilight box set
and the super cute necklace from Etsy I asked for
woo! 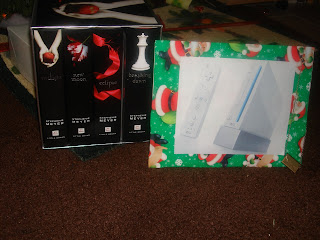 Twas an oh so lovely Christmas.

Friday: I most definitely did not turn my alarm on and enjoyed the perks of sleeping in. Afterward I ran some errands around town, searched for a Wii to no avail, and eventually came home to a marathon of Say Yes to the Dress. Matt came home from work to me curled up on the couch enjoying a nice long nap too, so that basically sums up my whole day, haha. Eventually some friends came over and we headed out to the bar. It was a fun night seeing some old high school classmates and all around just having a good time.

Mat and the guys at the bar 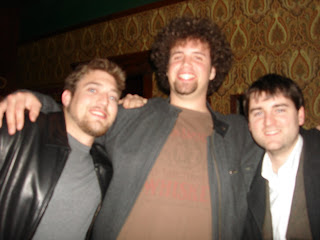 All in all twas another lovely night out.

Saturday: Woke early to do some more Wii searching, Matt actually left to hit a couple stores in what I called the great Wii Quest. I stayed home and cleaned up a bit before my friend Alli from college stopped on by. Alli and I hung out a bit and my apartment until Matt showed up with a nice new Christmas present to himself/us, haha: 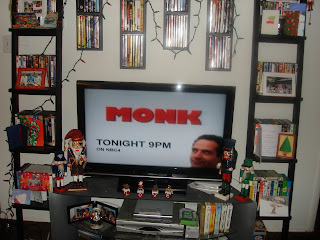 I must say, I’m a fan. All we have to do now is upgrade our cable to HD and we’ll be set. Anyhoo we finally headed off to lunch which was great catching up and hanging out, it’d be a year since I’d seen her which in my opinion is way too long. 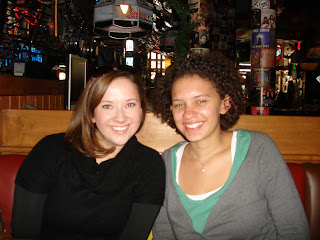 After Alli left Matt and I hit up a couple more stores searching for a Wii to no avail sadly. We made it home just in time for me to nap away some sickness and get ready to leave for my sister’s birthday at Pirates Dinner Adventure.

So yes about 20 of my family and my sister’s friends headed to Buena Park for a night of pirateness at Pirates Dinner Adventure. We went there last year for Matt’s birthday and it was so much fun. Basically a lot of arrgggghing and aye ayeing and awesomeness. Matt, my dad and uncle all volunteered for some preshow fun, my sister’s birthday got announced and one of my little brothers got called up during the show. So cute.

the guys all pirated out 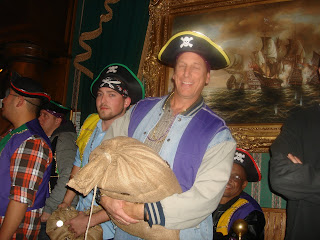 Matt and I enjoying some pirateness 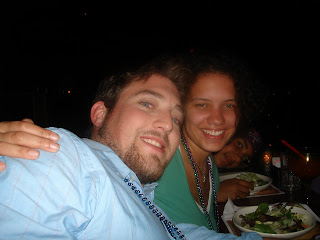 some of the show 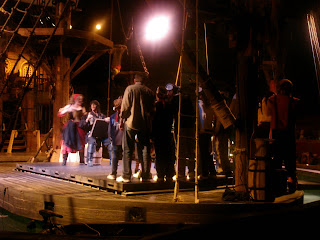 my sister and our pirate, the purple pirate 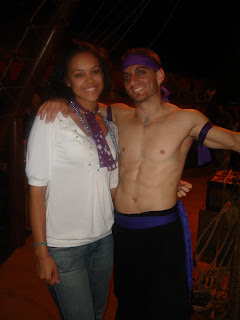 Despite not really being able to breathe it was a great night, loved it.

Sunday: Still plagued by sickness I slept in a bit, which was nice. Matt headed off to watch football at his dad’s house and some of my HS girl friends came over which was so fun. I don’t think all of us had been together for a long long time, so it was great to see everyone. We went to Panera which made the day even better since it’s so freaking tasty. After lunch the girls came back here to hang out and chat for a bit which was so fun and nice. After they all headed off I took a nice long nap and basically spent the rest of my night relaxing with Matt, drinking tea and trying to get better. Hopefully I’m 100% by New Year’s because bringing in the New Year sick would just not be cool.

Anyhoo I’ve rambled long enough, and how was your Christmas and weekend?
Hope it was absolutely fabulous!