Auburn Kat must be psychic since she posted yesterday that she hoped that it would be the day I met him and squeeeee she was right!

So how did it finally happen you ask? Well let me tell you….

I was sitting at my desk, working away (per usual) with my headphones on and my coworker goes “Kate! Kate! He just walked by!” I, as expected, darted from my desk to the door to double check this and oh! He was right, I saw Ryan walking away with dog and a friend in tow. So I dash back to my desk, grab my purse and head down the street behind Ryan with plans to go to the coffee house down the street. I really had no idea what I was going to do or say, but I just wanted to meet him. My other coworker came out the door behind me and we walked (a little faster than normal, haha) down the street when to my surprise Ryan stopped because his cute lil mohawked dog, George, had to do his business*, haha.

So basically my coworker and I walked up to where he was as he was trying to calm his dog, haha. I sort of walked by but then stopped to pet the dog (even though I’m highly allergic to most furry creatures, haha) and started making small talk. Eventually my coworker and I introduced ourselves…well she said her name and I don’t know what I said the first time because he had to ask and then I was like “Oh right, I’m Katelin.” I couldn’t help it, I was flustered, I was talking to Noah! After I told him I was a big fan and that his dog was cute and I was surprised I wasn’t sneezing, I finally mustered up the courage to ask for a picture with him. And he was more than nice about it and suggested we move away from where his dog had pooped and then peed, haha. So we moved to the sidewalk some more and my coworker took a picture, holla. Afterwards we both told him it was nice to meet him, he said the same, and then we kept on walking to the coffee house. Well I sort of skipped, but not too much, haha. So yes Ryan is just as cute in person as you would expect, he is incredibly nice, has a super cute and very active dog, and is so down to earth it just makes him awesome. He definitely gets super cool celeb points for all of that.

Oh and here is the oh so awesome picture that I can’t wait to add to my celebrity collection, haha, woo Ryan: 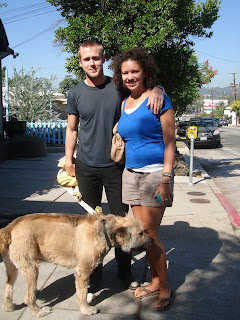 Oh and to add to the goodness, after my lunch I walked to the front of my office to walk back in and who was getting into his car with his friends? Yes. Ryan. Again. Two sightings in one day. Hark. Thank you celebrity gods, thank you.

*And yes for all you pet owners out there, Ryan did pick up the dog poop, just did it after we walked away, haha, such a good pet owner.