Because Hollywood is more exciting than my life. 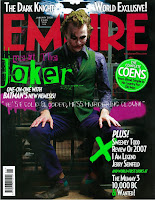 websites and phone numbers, it’s awesome. The movie doesn’t even come out until next July but already the Joker is on the cover of magazines and the Gotham Times has been posted online (along with the Joker’s rebuttal). I loved Batman Begins and can barely wait for this one to come out….eeeeeeeeee!

_I can’t talk about The Hills because I missed it last night (the horror!). So someone can fill me in because I don’t know when I’ll watch it, tonight maybe? I hope there was a fight, I hope she-Spencer was just as bad as her brother, I hope Whitney was awesome and pensive. Ah I’ll just have to wait and see I guess.

_ In more TV news, did anyone watch Heroes last night? Were you disappointed? Because I was. The episode was so anticlimactic! I called out who was going to get shot, who would be captured and basically everything that was going to happen. And oh man and I laughed out loud when West and Claire started talking, it was some pretty horrible acting on their part (or maybe just horrible lines, I don’t know, but it was bad). I just hope that next week’s season finale can redeem the season and leave me saying “WOW” just like the commercial promises.

_And more TV (man I’m a TV whore) news I suppose, last night was the first part of the Dancing with the Stars finale. Now I haven’t watched this show all season, but I must say that I am rooting for Mel B (aka Scary Spice). She’s awesome. Heck she’s a Spice Girl, so of course I have to love her. I even went so far as to vote for her last night (crazy! I know). And it was super cute to see the rest of the Spice Girls cheering her on in the audience (girl power!). Anyhoo, I hope Mel B wins tonight, woo!

_And apparently being a beauty queen is rough. A real life Drop Dead Gorgeous attempt at sabotage happened at the Miss Universe competition. Miss Puerto Rico’s costumes were sprayed with random crap and her stuff was stolen, man those ladies are vicious! Meow! Haha.

_And because I don’t want to talk about Brit, LiLo, or any other celeb starlets, I’ll share a Happy Birthday…to Michael Vartan! Honestly, who didn’t love Never Been Kissed!?!