I can’t believe that Halloween is only a week away! A week!? And before you know it Thanksgiving and Christmas and New Years, gah! Time seriously flies by sometimes and I have no idea where it’s going. Anyhoo. Instead of writing about the fires here in California (because it’s just getting so sad and crazy and there was ash on my car this morning, gah!), I’m going to post something much more entertaining and cheery. I’m going to share some of the best of the best of my past Halloween costumes. As a kid I had some pretty typical costumes (a witch, Minnie Mouse, a cowgirl, a pirate, a clown) and then as middle school rolled around I’m pretty sure I was “the Enchantress” all three years, haha. And by the time high school rolled around I was kind of too lazy to really embrace the awesomeness of dressing up. Instead I think I went as an “army girl” (basically stealing my dad’s fatigues) and I don’t really know what else. However, once college came around, costumes took on a whole new meaning. College was the best excuse to dress up. And I loved it.

And with that said I will share some of my favorite college Halloweens (at least the ones I could find pictures of last night): 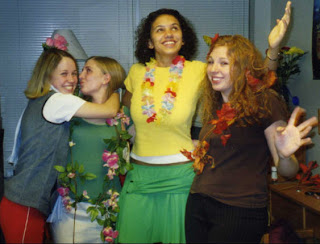 One of my faves…Spice Girls! Guess who I was? Haha. 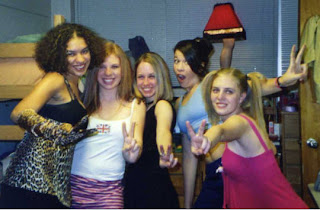 The ladies of the game Clue 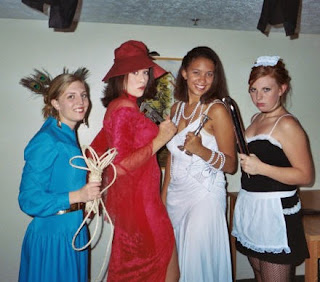 Ah, good times. Now that I’m not in college I’m not quite sure if Halloween will be as much fun. Well that and it’s on a Wednesday this year and Matt will still be recovering from surgery, so who knows what will happen. At least I can come home to tons of super cute trick or treaters since there about 93850984690905 kids in my neighborhood and all of them are so dang cute.

Anyhoo, time to get back to work. Happy Wednesday!