So remember way back when when I wrote about the Dawson’s Creek kids? Well I have some 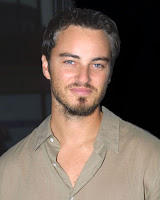 more funness to add to the mix. Apparently Kerr Smith (aka Jack McPhee) has done more than star in Cruel Intentions 3, he has also landed himself a new role on CSI: New York. I was watching last night with my mom and the main girl with curly hair (her name escapes me) flashes back to some new guy she met who sent her a parachute (I guess it has to do with risk taking or something, no idea really) and who’s the guy? Kerr Smith! I think I may have let out a small yelp of excitement (I know, issues. But I just love seeing the DC kids in action). Sadly that was all his role entailed on last night’s episode. According to my mom he was on it last week more and from the looks of it he will be appearing in the near future as curly hair lady’s love, woo!

And in other DC news, the news I wrote about last time…Mr. Dawson Leery himself (aka James Van Der Beek) has his cameo on Ugly Betty tonight. Now I have seen random tidbits of the season so far, but I’m going to be pretty compelled to watch the whole thing tonight. It’s Dawson, how can I not watch??? I really have no idea what his role is on the episode, but I am quite excited to watch, woo.