So apparently a lot happened in the celeb zone this weekend. And I feel it is my duty to catch you up on some of the best ones….

Well I missed the VMA’s last night (long story) but I heard I didn’t miss much (luckily Matt DVRed them for me anyways, woo). I guess it wasn’t as good as it could have been or has been the past couple years. No major drama or amazing performances (except I heard that Rihana 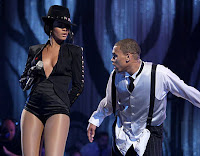 and Chris Brown pretty much rocked it). And speaking of performances, Britney. Britney. Britney. So after I realized that I had missed the VMA’s I went straight to my computer to see Brit’s big comeback performance that opened it all. Well I didn’t have to go far to find headlines reading “Britney Bombs“, “Britney’s Comeback a Bust” and “FU Britney“, an open letter to Brit from Perez. So basically with all of that I still had to watch and see what went so horribly wrong. (check it out here if you happened to miss it). So I watched it and I agree, it wasn’t great. It wasn’t as horrible as some people said, but it definitely was not the comeback that everyone was hoping for. She just looked like she didn’t even want to be there, so unenthused, scraggly weave, glittery bra and undies (and she def doesn’t have the body for it anymore) and all around frazzled. Apparently even Brit knew how bad she did and was just all around embarrassed. Ce La Vie. Come on Brit! Get it together!!!

In other VMA news, Kid Rock and Tommy Lee got into a “scuffle” and had to be escorted out of there (fighting over Pam perhaps?). As much as I like Kanye West, guy needs to grow up. He went on ranting again back stage since he got snuffed for all five awards he was nominated for. So grow up Kanye, it’s just MTV awards. Besides that there were lots of people looking hawt or lookin hoey, whichever. Here are some of my faves…ish:

Hayden, Hayden. Love the dress (she has the bod for it), but why the hooker heels???

I usually love these girls and their style, but not so sure this time. 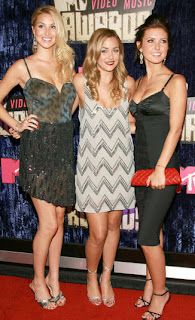 Well that’s all I got on the VMA’s but one of my fave bloggers, Trent at Pink is the New Blog, got to go to the VMA’s and also has some fun coverage too. So feel free to check him out, woo.

And apparently there were other things happening besides the VMA’s this weekend, haha. Like let’s say Justin Timberlake can now add an Emmy to his list of awards. Oh yes, “Dick in a Box”

won at the Creative Emmy Awards last night for best song from television.

Gotta love it. And usually I don’t think I would post about Cavalli opening up a new store, however my favorite couple was there, so I have to post about it, haha. Josh Jackson and Diane Kruger were looking cute and cozy at this party and I just heart them. Granted I don’t know how I feel about what they were wearing, but I can get past it, I like them too much. And I can’t wait for National Treasure 2 to come out, because that’ll mean more promos and press conferences and openings and galas and more Josh pretty much, haha. I like you Diane, but I love Josh more.

And lastly in Hollywood news, the Cruises were out and about in Germany while Tom is filming and Suri is still lookin cute. But I think the girl needs a hair cut, it’s starting to look like a bowl cut. Get on that Katie! And 3:10 to Yuma, the new Christian Bale flick with Russel Crowe, scored number one at the box office (wahoo!). I have yet to see it, but I hope I will. It looks good and Western and it has Christian Bale (does it need anything else?…Keanu Reeves maybe? haha. Maybe not).

Okay well that was a long post and I still have more I can write about, haha. But I think it’s time to call it quits for now (I do have real work to get to, haha). Happy Monday!