Violet where were you yesterday?? I missed you. Haha, okay that sounds creepy, I am not a pedophile, I just think that the Garner-Affleck family is so overly adorable, I heart them. So here’s Ben and Violet out celebrating his birthday, precious. 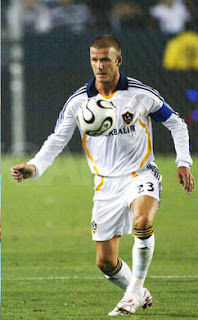 And in other news, David Beckham scored a goal last night! Woo! Finally, that ginormous paycheck being put to good use. David played a full 60 minutes and scored one of the two goals that gave the Galaxy a 2-0 win over DC United. Woo.

And now there is a video to go with it….Gosh I love YouTube:

Other than that, so far I’ve just seen some random photos of Brittney Spear’s “Allure” photo shoot (big whoop), Paris Hilton being Paris Hilton, and so on.

However, in some somewhat disturbing news, Spendi have come together to form “music.” It premiered this morning on Ryan Seacrest and oh man. I’ll admit it is kind of catchy, but a total studio mix and I feel like she’ll be horrible live. Oh and even better (worse) Spencer raps on the song!! Gah! …update. apparently that single wasn’t supposed to be released, har har har.

And that’s it around L.A. right now….I know there will be more to come later, it’s L.A. people, someone is always out shopping and needs to have their picture taken.

Update. Despite what I reported yesterday, apparently little Suri will not be doing Gap ads, sad, I was looking forward to it.