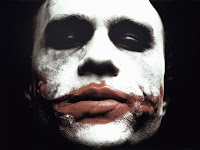 So apparently the people behind The Dark Knight are starting their marketing now (a whole year before the movie is due out!), just to drive fans crazy and get us all revved up for a movie that is sure to be awesome. So thanks to Trent on Pink is the New Blog I can share these crazy sites (with a teaser trailer even!):
http://whysoserious.com/
http://www.whysoserious.com/policereport.htm

UPDATE:
So apparently it was just a short running campaign (or going on for a while and I only found out at the end), but the phone number is no longer in service. It was a guy that was “held hostage” by the Joker (is my guess) and asked clown jokes and was really scared, creepy basically. And the site I believe is still up but is now just all of the participants in the Joker’s army or whatever. There was a police report for the Joker and a super teaser trailer for the movie, but alas they are no more. Oh well. I bet more of these random marketing devices will pop up as the movie opening nears, we’ll just have to wait and see…..